Levring House by Jamie Fobert Architects, a sophisticated contemporary house on a tight corner site in a central London mews, is the latest home to be shortlisted for the 2015 RIBA House of the Year award (announced today 18 Nov at 10pm), sponsored by specialist insurer, Hiscox.

The annual award is run by the Royal Institute of British Architects (RIBA).

The projects in the running for the UK’s most prestigious award for a new house are being revealed in a special four part TV series for Channel 4, Grand Designs: House of the Year. During the course of the series which began on Wednesday 4 November 2015, the seven homes shortlisted for the 2015 RIBA House of the Year award will be announced; the winner will be revealed on screen on Wednesday 25 November.

A combination of alignments, setbacks and a sunken basement belie the true volume of this house, which includes a garage, extensive plant rooms housing the machinery for deep bore ground source heat pumps and a 14-m long marble-lined lap pool in the basement.

Externally the building is finished with an elegant palette of Danish hand-made bricks, bronze panels and plenty of glazing to draw natural light into the heart of the house.

Levring House joins the following four houses on the RIBA House of the Year shortlist, with another two yet to be announced: 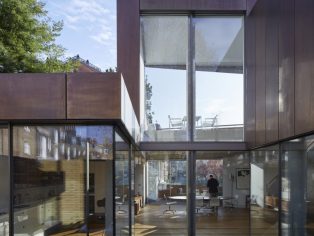 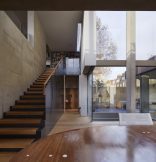 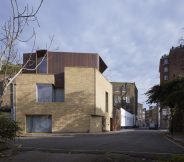