The six finalists for the Royal Institute of British Architects (RIBA) International Prize 2016 have been announced today (Thursday 27 October). The buildings will now be visited by the Grand Jury of the prize before the winner is announced on Thursday 24 November 2016.

The selection follows a rigorous judging process which saw the RIBA awards committee travel to 30 buildings across 5 continents before choosing six buildings which will be visited again in November. Setting a new global standard for architectural achievement, the prize will be judged by a grand jury of experts chaired by world-renowned architect, Lord Richard Rogers of Riverside.

Projects demonstrate a range of innovative responses to the role of public architecture, providing major new additions to their contexts and communities.

The refined restoration of an existing industrial complex and newly constructed contemporary arts centre in The Azores (Arquipelago Contemporary Arts Centre); a radical new culture centre and public space in the capital of Azerbaijan, (Heydar Aliyev Centre); a new museum of contemporary art in the heart of Mexico City (Museo Jumex); a new civic library and concert hall in northern Norway (Stormen Concert Hall, Theatre and Public Library); a war memorial in Northern France engraved with names of the thousands who died in WWI (The Ring of Remembrance, International WWI Memorial of Notre-Dame-de-Lorette) and a university of engineering in Lima (UTEC – Universidad de Ingeniería y Tecnología). The finalists in contention for the RIBA International Prize are as follows (alphabetically):

Arquipelago Contemporary Arts Centre (Menos é Mais) is located in The Azores, an archipelago of nine small islands in the middle of the Atlantic Ocean. Restoring the site of an 1890s sweet potato distillery, the building expertly combines restoration, reconstruction and new build, drawing on the history of the building and its distinctive black Basalt exterior to create a restrained, industrial character. Constructed over the course of three years, the process revealed a complex of cloisters and cells in the basement of the old distillery, which have been transformed to display artwork – an ancient backdrop for very contemporary use. The building has become a beacon for progress both locally and internationally, and has made a substantial impact on the local community – showing respect for its past and ambition for the future.

Designed to celebrate Azerbaijan’s independence and first president Heydar Aliyev, Zaha Hadid Architects’, Heydar Aliyev Centre in Baku was completed in 2013 and offers a vibrant programme of arts, music and performance to audiences in the vaulted spaces and distinctive wave-like form that dominates the eastern aspect of the city. The building represents a break from tradition – not least in the post-Soviet landscape of Baku, and now welcomes over 1000 visitors a day as both a public social space and a cultural nucleus for the city.

The complex landscape has been brought together into a single, fluid composition which appears out of the hill. The building is distinctive not only for its scale and undulating form, but for its use of white cladding and paving, a marked departure from the traditional architecture and aesthetic of the city. The heart of the building is found in its sophisticated and welcoming central auditorium; a warm performance space whose innovative use of oak to line and sculpt the interior showcases a sophistication in both vision and joinery.

A structure that celebrates the industrial heritage of its site context in Mexico City, David Chipperfield Architects, Museo Jumex is home to the largest private collection of Latin American contemporary art in the world. Centrally located in a bustling and overcrowded city, the building offers a contemplative space in which visitors can escape the rush of the city.

A large public space is divided across three spacious levels; a glazed Piano Nobile gallery and a flexible secondary space punctuated by a single large window flooding the space with light. The top floor opens out to present the museum’s collection under a soft diffused daylight through original factory roof lights. The quality of light distinctive to Chipperfield’s practice defines the space, as does the consistent sense of quality in the materials and subtle detailing that separate public from work space. A characteristic dialogue of travertine and timber marks the Museo Jumex as a remarkable building.

Stormen Concert Hall and Library has created a new community focus for a small town, with two new civic buildings in Bodø, 100km inside the Arctic Circle. DRDH’s first major building commission, the scheme is expertly stitched into the existing urban fabric, playing off the link to the town centre as well as the nearby harbour and the luminous experience of the Arctic sunshine. With rigorous attention to detail, material and the user’s experience of both the space of the library building and new concert hall spaces, the architect’s design is matched with technical ambition. The concert hall houses three music venues within its structure, and is considered comparable to the New York’s Carnegie Hall as one of the best in the world for symphonic music.

The Ring of Remembrance memorial in Notre-Dame-de-Lorette near Arras commemorates the thousands who died in the region during World War I. The unification of former enemies is the strong idea that underlines AAPP’s design scheme of the ring, inscribing all 600,000 names irrespective of their nationality, creed or rank. Located on the Hill of Lorette the location has long views over the battlefields of the plain of Artois, the piece sits lightly in the landscape, rooted at one end but cantilevers out precariously as the landscape falls away, and representing the fragility of peace.

The UTEC in Lima is a new faculty for a 50 year old engineering university to enable young Peruvians to gain engineering qualifications and to encourage social mobility. This powerful statement of a building symbolises a bold and positive future for Peru, and draws on the temperate climate of the city and cultural environment. Grafton Architects have created an innovative solution to the architectural program in the design of a vertical concrete campus, with open ended spaces of circulation interlinked with a series of suspended platforms that flow in between the structural frame, offering a balance between enclosed spaces and permeability to the exterior.

In recognition of the quality of the entries on the longlist, the committee have named 21 recipients of an RIBA Award for International Excellence (alphabetically):

The Awards committee have also recognised the achievement of Rural Urban Framework for their ambitious plan for Angdong Hospital in Baojing County, China with the RIBA International Emerging Architect prize. The award is presented to project directors John Lin and Joshua Bolchover, who set up their research and design collaborative in 2005 as a non-profit organization providing design services to charities and NGOs working in China.

“The RIBA International Prize was created to showcase the best new buildings worldwide. At its heart, the prize celebrates architectural excellence, vision, and the power of great architecture for the public good.

“The finalists selected by our jury represent an exceptional selection of buildings across the world, and notably include a number of buildings dedicated to culture and the arts, reflecting the visionary clients who have commissioned architecture of the highest calibre. It demonstrates the understanding of how a building can powerfully communicate the shared history of our cultural past and present, and become a focus of civic pride for the people that use these spaces whether for meeting and enjoyment or cultural appreciation.

“This is seen in each of the buildings on our final list, including a university that specialises in engineering but which incorporates a theatre and cinema space into its campus. Whilst creating a locus for students and staff, these interventions reflect the integration of science with culture in their programme of studies.

“Our panel of jurors have been particularly impressed by the way in which each building reacts to, resolves and assimilates into the varying geographies and contexts – from dense urban cities to a small town in the Arctic Circle. Each project resolves the complex demands of its context with ingenuity, exceptional detail and finishing and a sensitivity to the needs of the users and communities which will inhabit these spaces.

“The selection speaks to the positive impact of investing in culture, in quality and in architecture which has a direct impact on the communities that use them. Expanding our awards to a global network of ambitious and visionary architects has resulted in a truly valuable insight, and we look forward to announcing the winner following the Grand Jury’s visits and deliberations.” 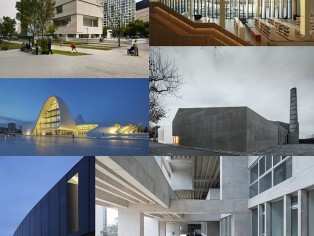 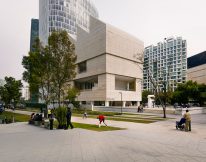 Ring of Remembrance memorial by AAPP. Photo by Aitor Ortiz