Restoring a Palace to the people – Alexandra Palace, London

The refurbishment of a London landmark offers an alternative to traditional ‘new for old’ theatre restoration to create a major community venue, writes Steve Menary.

Alexandra Palace opened in 1873 as the People’s Palace, only to be burnt to the ground just 16 days later. In May 1875, a new Palace opened, this time including a theatre.

Six decades later, the BBC leased the eastern part of the building, which went down in history as the origin of the first high-definition television broadcast. The building was the corporation’s main transmitting centre until 1956, and was used solely for news broadcasts.

In the 1980s, another fire hit the building. The area controlled by the BBC was spared by the blaze, but fell into disuse. The old theatre, which included a silent film projector and a vast decorative ceiling, had not been used since before the Second World War and has been closed to the public.

Now, Feilden Clegg Bradley Studios (FCBS) and contractors Willmott Dixon are collaborating on a complicated project to bring the partly-dilapidated theatre and the East Court of the Palace back to life.

“The conservation officers say that unless it’s in danger of falling off, anything we do has to be reversible,” says Tony Dowling, operations manager on the project for contractors Willmott Dixon. FCBS describe their vision for the newly restored Alexandra Palace is one of ‘arrested decay’. “The 19th century theatre, dark and unused for over 80 years, bears a highly atmospheric patina of age,” according to an FCBS design statement. “It is a true ‘found space’, a snapshot of a grander time.”

“Arrested decay is the buzzword for the architects, who want it to look ‘as is’. There are flaky walls where the render has gone, but as soon as we are as far back as we can be, then we are sealing the walls with a specialist sealant and leaving a mixture of paint and render.”

“There are loads of theatres that have been restored with all the gold leaf put back. They don’t want it like that; they want it to look like the photos in the leaflets they distributed to raise money – to look like you have just walked in to the original building.”

Willmott Dixon has its site office in part of the building above the East Court. Most of the walls there are clad with plasterboard, but one wall has been left as an example of this ‘arrested decay’ that FCBS are looking to achieve.

The ultimate objective of the commission is to directly support the transformation of the eastern end of Palace, restoring public access to the most historically significant – yet currently derelict – parts of the building, faithful to the vision of its founders in 1873. In addition, the scheme looks to make Alexandra Palace a world-class exemplar of best practice in community heritage regeneration and a key hub for the city of London’s cultural offer.

The brief set to FCBS asks for the “restoration of the surviving interior finishes of the theatre and balcony with minimal intervention to retain its historic fabric, but conceptually fitting it out to modern standards consistent with its planned use as a community and commercial venue”.

The work also included levelling the theatre auditorium floor to offer flexible use and improve accessibility, creating and enabling public viewing of the Victorian stage machinery under the theatre stage as part of a structured tour. The backstage spaces and the northeast tower are also being refurbished to provide storage and room for the performers.

However, with a building that dates back nearly 150 years, significant structural repairs are required.

“The existing roof trusses on the theatre showed some signs of serious decay after specialist investigations,” explains Wright. “We put the slab in early so we could get scaffold up and we are propping up two roof trusses with the most serious decay. The ceiling is being repaired as best as possible.”

The ceiling is a lathe and plaster style and some of the plaster above the trusses has decayed to a point that serious remedial work is needed. This means members of Willmott Dixon’s construction team have to work in tight spaces above the ceiling, but below the roof trusses. “It’s a long, slow process,” confirms Wright with the look of someone who has been on site for a year and not achieved all they had hoped for.

Willmott Dixon initially arrived on site to do enabling works but the process of assessing what can be saved and how to do that has delayed the start of the actual refurbishment. Work finally began in spring 2017 with the theatre floor being levelled and the scaffold erected. Eventually, all 1,200 original floorboards will be re-laid.

“We’re numbering them, it’s a massive jigsaw,” says Tony Dowling, whose role also includes liaising with the swathes of people who have contributed to making the long-running project happen while retaining as many of the building’s original features as possible.

Sticking to the theatre script

It’s clear that while the project involves saving as much of the theatre as possible, some parts were not only beyond saving, but had gone altogether. When the contractor arrived on site, there was no seating in the theatre, in addition the balcony had (originally) been built at the wrong angle; it is being saved however and new retractable seating has been added above.

The theatre is the most complicated part of the project. On the other section of the restoration, comprising work to the East Court, Willmott Dixon are being allowed to remove some elements and have laid a new floor slab.

“The fabric of the building is in a reasonable state,” explains Wright, who adds: “This is going to be a ‘people’s area’ and won’t be arrested decay but it won’t be super modern either.”

The creation of a revitalised public space in the East Court with its glazed roof will house a flexible space for learning and participation, where visitors will be able to learn about the Park and Palace’s history.

A careful approach will be vital through-out the work, and Wright has pinned a notice on the wall of the theatre reading ‘The Theatre is 150 years old. Treat it with respect’.

“People think because it looks wrecked they can just leave stuff leaning against the walls,” protests Dowling.

The overall project is valued at £26.7m, but the third phase of the scheme comprising the restoration of the historic BBC studios will start at a later date.

In 1936, these studios gave birth to a new era of television broadcasting. The Palace team are currently setting out a project plan and timeframe for the studios as part of the next phase of restoration works. The theatre restoration and East Wing should be complete by next summer, with a view to the revamped Alexandra Palace re-opening in the autumn of 2018.

The restored theatre will operate in several different modes, from a traditional production to theatre-in-the-round style, with the audience surrounding the stage. The venue’s capacity will range from 800 to 1,300 and, once opened, it will start generating income that will help enable the final part of the restoration works. 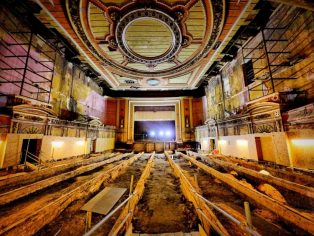