Brick may be one of the oldest construction materials, but its popularity hasn’t waned and archi- tects are constantly reimagining its application. Regardless of the project type, there’s an increased focus on bricks’ design quality and how their use can enhance the overall design of a scheme.

To address this demand, the market has developed a host of brick styles ranging from limewashed bricks for a softer appearance through to white glazed bricks that forge an industrial feel. Across conti- nental Europe and the US, brick slips have enjoyed a booming popularity that has also caught on in the UK. Brick slips are thin slices of masonry that replicate the look of conventional bricks, and are

ideal both for external facades, particularly for timber-frame construction, skin-to- cover render or previous brickwork, as well as for decorative use on internal feature walls.

There’s also a thriving market for traditional handmade bricks that are increasingly used by designers looking to achieve an authentic period look; a contemporary rustic finish, or to highlight modern fittings and set their scheme apart from the rest.

There’s still a demand for reclaimed bricks, but they can be hard to find in any specific quantity and difficult to preserve and transport – while there’s no standardised testing, builders typically report 20 per cent wastage. In addition, reclaimed bricks can be expensive and a relatively lucrative target for thieves.

A viable alternative to antique bricks are kiln-fresh handmade bricks, which are a premium product but much more cost- effective; they carry a CE mark, can be frost resistant and are available on reasonable lead times.

It’s now possible to manufacture handmade bricks that match the area-specific types used across the UK: from London yellows, to rich oranges in the Midlands, deep blues in the north and reds in the south. Richard Lomas, principal of Sheffield-based Lomas Architecture, commented:

“Getting the colour and size of brick in the quantities we need is an important factor. Working across the north of England, we use many different styles and colours. Obtaining samples and choosing the closest match can be difficult, so the opportunity to source as many new handmade bricks as we need, knowing they will be exactly what we want, is a real advantage.”

Textures also vary according to the period of the brick, the area it’s from and even its position on the building. In some regions, facade bricks are smoother than those used on the rear and side elevations. Brick sizes can also be locality-dependent, from standard 23⁄4 inch to the 3 inch bricks popular in the north and Midlands. In the years before 1965, all bricks were imperial sizes, so it’s important to use an exact match when extending or refurbishing a period property. Brick blends of colours and types, or off-the-shelf or bespoke weathering and tinting, are additional options, which ensure new brickwork integrates seamlessly with the original.

In keeping with local character

Architects are also designing new-build projects with regionally-matched handmade bricks. This is essential for – but not restricted to – new developments in conservation areas, and doesn’t necessarily mean a pastiche of old styles, but rather addresses planning constraints and places a focus the character of the area. Developers are increasingly adopting fresh approaches through which they can create developments that reflect local architecture, but also offer a modern twist through enhanced designs. For example, reclamation-style bricks mixed with floor-to-ceiling glass make a bold statement. A property instantly matches its surroundings, yet stands out for all the right reasons. Unusual combinations of bricks and mortar – such as London yellow brick combined with a dark grey mortar – add an individual touch to a traditional design.

The versatile application of bricks has been demonstrated in recent projects involving Imperial Bricks. The owners of Fatto, an Italian restaurant in Bahrain, wanted to re-create the look of a weathered urban industrial building. They used 50,000 Urban Weathered brick slips externally and internally to achieve the desired effect. In contrast, a private Grade II listed manor house in east Kent used hand-made bricks for a large extension, including a kitchen, bathroom, indoor swimming pool and traditional walled garden area. A combination of Reclamation Georgian and Country Blend bricks were used to blend the new building with the existing home.

The Master’s House in Ledbury, Herefordshire is another illustration of how modern imperial-sized Country Blend bricks were used to repair and extend a listed building. During the Butler Hegarty Architects-led restoration, the fabric of the medieval building was restored in a way that matched the original brick walls. As a result of the refurbishment, the building was ‘rescued’ from English Heritage’s ‘Buildings at Risk’ register and won three prestigious RIBA Awards including West Midlands Building of the Year 2016. 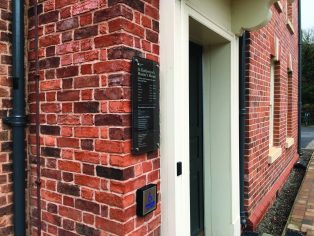