Greenwich Market has adapted over the centuries, but has its latest regeneration, realised in the wake of a high-profile failure, future-proofed it? Amy Dron finds out.

First assigned to the commissioners of Greenwich Hospital in 1700, historic Greenwich Market moved to its current location in 1831 and has continued to adapt over past decades. The successful completion of its Barr Gazetas-designed regeneration in April of this year has started the next chapter for this former fruit and vegetable market turned artisan and antiques hub. As well as providing additional retail space, flexible public realm and improved facilities including a new roof offering more daylight, it preserves and revitalises the market’s community and heritage.

Having been appointed head of property for this unique Crown Charity’s estate department in 2012, Gillie Bexson was inspired with a passionate vision for the site’s regeneration as she ate market food and surveyed the rubbish-compactors and storage areas of Durnford Street.

Bexson had come in after the previous Hopkins Architects scheme for the market was cancelled following objections in the local press – even after it got planning. It involved plonking a 100-room hotel on the site.

This was at the front of her mind, as was Barr Gazetas. The team was already involved with Greenwich Hospital and Bexson commissioned them to begin working on new plans for the market in 2013.

From his airy office just off Regent Street, Barr Gazetas’ project architect, David McIlroy diplomatically puts the trashed scheme into its historical context. But despite his gentle manner and sympathetic approach there is nothing to suggest he approved of it.

“The Hopkins scheme was a project of its time, it was the product of a boom,” McIlry explains. “We asked, where do we go from here? It’s a World Heritage Site, a conservation area; sensitive culturally, socially and in a community sense.” He describes the overall design approach as: “Starting again from scratch, the place became the client: the market traders, residents, shops and businesses above.”

The extensive period of consultation included numerous local visits by the design team, ensuring people knew this was not the massive change previously proposed. Demonstrating what maintaining the heritage fabric yet revising it for today’s

aspirations meant in practice was not easy. A model of the entire island site was made and displayed at two public exhibitions.

A total of three exhibitions were staged, to which councillors, stakeholders, residents and traders were invited. Feedback was then compiled and responded to, informing the next stages and leading through to the planning process.

“Greenwich Hospital is a significant landowner in  the area,” says McIlroy, “able to make masterplanning statements to improve the look of the whole town centre in one scheme.

At the same time, the local authority is the Royal Borough of Greenwich so we had to listen to them, keep avenues of communication open and understand where their conservation and planning officers were coming from.”

World Heritage has a body overlooking developments within the area so was involved, through planning, with the planners consulting with them.

“We went for two pre-applications so there would be no surprises. The main heritage points were the existing steel frame for the market roof, the heritage cobbles and a building known locally as the banana warehouse, formerly used for ripening bananas. There was a lot of emotional connection to those three things.”

A sensitive approach to the site

Phase one began with heritage experts Fairhurst Ward Abbots (FWA) appointed as main contractor. It was essential for the market to remain operational throughout the construction process so the 18-month regeneration occurred in four phases. Initially, all the supporting spaces, the yards, storage space and ancillary buildings, were overhauled and gutted to create space to temporarily relocate half the market. Museum of London Architecture (MOLA) had a watching brief so if anything was discovered they were called in to oversee and investigate. Some interesting glassware and unexpected basements and remains of houses along Durnford Street were found, but, luckily, there were no major discoveries which would greatly impact on the scheme.

During phase two, the southern half of the existing market roof was stripped back and the cobbles lifted. Maylem, responsible for all the ground works, discovered an old, defunct tidal drainage system that ran down the centre of the market, but this was removed.

Health and safety aspects and escape routes had to be considered alongside continued access to the shops within the perimeter of the market. Strong communication was maintained between the contractors and the permanent onsite market management team, who smoothly facilitated the moves between phases and resolved issues relating to storage on site.

With the roof removed, traders were pleasantly surprised by the level of light that was suddenly pouring in:

“There were concerns it would become dark again,” reveals McIlroy, “so when the covering was replaced we increased the amount of transparent area and used glass to replace opaque corrugated acrylic dating from after the Second World War.”

The roof was also raised in order to improve airflow and increase cooling during the summer with McNealy Brown responsible for all the metalworks, including the new stainless steel pavilion destined for Fry’s Court.

The cobbles were re-laid in square fields, using old plans for the market as a guide. They were retained as part of the heritage fabric but with new granite paving inserted for wheelchairs and pushchairs. Stalls now sit in rows along the granite with the trip hazard of exposed cables removed as all supplies of power and water were put into the ground in floor boxes.

As phase two completed, FWA went into receivership. The experienced Bexson propelled the project through this unanticipated event.

“This had never happened to me before, but I just knew that Greenwich Hospital’s commitment and duty to its traders, retailers and, ultimately, its beneficiaries meant no delays could be tolerated. As soon as I heard the sad news, I met FWA on the following Monday then the subcontractors on Wednesday to find out their positions. An arrangement was agreed regarding payment as none of the final settlement had been received by the subcontractors.”

Some of the main subcontractors who had been working for FWA were retained onsite under contract management, now directly employed by Greenwich Hospital.

“Cost and project management was taken over by FWA director Dave Brown, who set up as Red Reef, with FWA contract manager Simon Wheeler and freelance project manager Tom Jordan,” recalls McIlroy. Less than two weeks were lost on the programme.

Phase three saw all traders moved from the north to the south, and work begun on the northern half of the market. McIlroy explains:

“There is still a lot of high-level power and all of the lighting is contained within an innovative perimeter trunking system which is designed to appear as part of the structure.” He continues: “Lighting is time and season controlled for power saving and there is provision for audio visual systems for stage use in two locations within the market, and also out in Fry’s Court for events including stage shows.”

It was during phase four that the regeneration of Durnford Street and Fry’s Court really became obvious. Three new retail units were wrapped around the refurbished banana warehouse creating 2,900 ft2 of new retail space.

“We knocked around 4,300 ft² of storage space within a disused 1960s office block,” expands McIlroy, “allowing us to create 4,700 ft² of flexible public realm within Fry’s Court and accommodate market overspill on the busy weekend period. As planters were built, soft vegetation went in and the curved stainless steel pavilion went up it became clear just how much the market had expanded.”

The completed scheme was officially opened by Prince Andrew to overwhelmingly positive reactions. The main market area is neater and tidier with a strong visual link to the mast of the nearby Cutty Sark and listed buildings set around the perimeter. Tenants are extremely pleased with the outcome, particularly the increased roof transparency and CCTV security.

The permeability of the site as well as well as how pedestrians pass through Greenwich town centre have also been improved, along with the chance to sit and mingle. As the site was continually operational, traders were not lost, new ones have been attracted and tenant retailers located inside and on the perimeter of the site have seen increased footfall.

“We’re really proud to call it a success for Greenwich Hospital in terms of adapting old buildings,” sums up Gillie Bexson. “It is important, and a responsibility, to look to the future, and hopefully this will future-proof the market for years to come.” 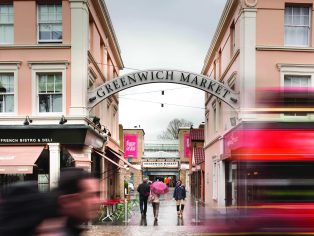 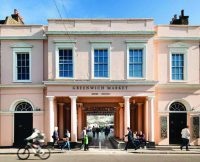 The inclusion of planters, soft vegetation and the curved stainless pavilion are all key parts of the regeneration © Philip Vile