Reed all about it

Ais one approaches the University of East Anglia’s new 3,400 square metres Enterprise Centre, its surface presents something of puzzle.

Is the cladding wood, a light brown brick, or a straw colour painted on something?

In fact its thatch, from possibly the largest single job the thatching industry can have had in modern times.

The thatch acts as a rain screen on a building designed to meet both Passivhaus and BREEAM ‘outstanding’ criteria for energy efficiency.

UEA wanted a building that was both low carbon and made use of locally sourced materials, and East Anglia has plenty of reeds and a busy thatching industry, though it usually works on domestic projects.

It was a chance meeting in a pub that led to the project supporting an entirely new industrial thatch process.

The £11.6m Enterprise Centre will house small and start-up business that need to work with the university’s academic staff and is near to, but not on, the noted 1960s modernist campus.

Its designer Ben Humphries, of architectural practice Architype, takes up the story: `

“The building needed to be exemplary for low carbon and to use locally sourced materials, so this led us to study what was available that was renewable and with low embodied carbon.

“We thought it would be great to do a contemporary take on thatch. It would make an incredible expression of low carbon because the rain screening is often the first thing you come across in a building.

“It just used hugely less carbon than anything else we found, indeed straw absorbs it.”

“One idea bandied around was that it would be interesting to extend the normal thatching season and make thatch in barns, then put it into wooden cassettes that could be craned into position,” Humphries says.

“Steve thought this a bit strange, but liked the idea as in winter thatchers normally have to find other work.”

The only conventional thatch in the building is on the roof, where light wells rise and these were clad in situ.

An enormous quantity of thatch was used by the industry’s normal standards.

The effect of such a structure near to famous modernist ones by eminent architects like Denys Lasdun and Norman Foster is to:

“Create a building that shares those characteristics but is softened by the thatch with the use of alternate thatch panels and glazing on the walls so that when viewed from an adjacent park through trees it dematerialises the building a bit”, says Humphries.

Although the site had been a storage yard, it is surrounded by sensitive areas to which the Enterprise Centre had to relate. To its south is Earlham Park, a conservation area, to the west a dense bank of trees and a memorial garden next to the Grade 1 listed estate Earlham Hall, to the east the main university access road.

“We wanted it to relate in a low-key way to the memorial garden but to have a real presence from the university drive,” Humphries says.

The building sits on a concrete slab and is built on a timber frame, locally sourced from Thetford Forest.

“There is not much structural timber in East Anglia but there is Corsican Pine,” says Humphries.

“That is usually thought not to be good for structural use, but that is a bit of a myth, though it took a lot of hard work to persuade various parties involved of this.

“We’ve shown it works; hopefully others will follow as East Anglia has a huge amount of forest.”

A Passivhaus building has to sit within a ‘duvet’ of insulation right round it, including underneath.

The original plan for a suspended timber floor had to be abandoned both because of cost and ground conditions so a concrete slab was instead laid on top of Isoquick insulation, which allows the building to be ‘wrapped’ without cold bridges.

This concrete proved to have another use when floor coverings were considered.

“If you’re assessing carbon over 100 years one of the things that is really carbon intensive is floor coverings, so we used the concrete slab, polished and diamond ground it and there will be just a need to lacquer it occasionally.”

Elsewhere in the building, linoleum made from linseed and hessian matting sits on recycled glass screed.

The building also makes use of some unusual recycled materials. Old benches from a chemistry laboratory were found to be African iroko wood and used as part of external cladding facing the building’s courtyard alongside some 20-year-old seasoned oak, which had been left unused for many years in a local timber yard.

Seven locally sourced larch columns, each of about 7.5m hold up the canopy over the courtyard.

The team had wanted to use locally-sourced larch throughout the building but “the cost was prohibitive for the glulams, which was a real shame, but the Austrian glulam industry is very established, so we used that”, Humphries says.

Four interior work pods on the first floor acknowledge local materials, being clad in nettle fabric, earth board, reed board and hemp and lime render.

A lecture theatre protrudes from the building into the courtyard and sits in a flint bed that acts as a sustainable urban drainage system.

The flint has been employed around the building as a landscaping material and as part of the drainage system.

Sourcing such a large quantity proved another procurement challenge as local quarries were uncertain how much was available.

In another pioneering usage, the canopy’s soffit and south facing wall use medite tricoya a wood grade MDF not previously used at this scale.

UEA was keen to have a durable roof, so a traditional felt one was chosen with in situ thatch on the light wells that break it up. Most of the roof is covered with photovoltaics.

Mechanical ventilation allows air in where needed, but the building relies largely on natural heat and ventilation and heating is minimal. In very cold conditions radiators of some 450 x 250mm heat rooms some 30 square metres.

A fixed brise soleil has been designed to deflect sun at both summer and winter angles.

It was important throughout the process to work closely with UEA’s teachers, management and maintenance staff and students and the ‘soft landings’ approach was used with meetings of up to 70 people giving their opinions.

“Such meetings can be unwieldy but we found these incredible useful drawing on people with considerable experience of operating buildings for teaching,” Humphries says.

“Soft landings means we will stay involved through completion and handover to ensure everything works.”

The building will be one of the UK’s largest Passivhaus projects to date.

“In Germany they have done buildings of this size for years so it’s not a big deal really, though issue like heat gain are more complicated in a multi-occupancy building where everyone has to be aware of how to use it.

“We always attend to detail of course, but the big thing here was getting the supply chain used to the idea that if something went wrong, like they put a hole in a wall, they should tell us and we’d put it right at that stage, you do not want to have fix things later on with this.”

Using the concrete slab rather than timber floor altered the initial calculations but the building is recorded as using 443 kg CO2 per square metre over 100 years, a quantity Humphries says is about one quarter that of a conventional structure.

It secured a rating of 90.8 for the BREEAM ‘outstanding’ category at its design stage and aims for 92.8 for the construction stage.

While the Passivhaus standard is 0.6 air changes per hour at 50 Pascal, the Enterprise Centre has this down to 0.21.

Humphries believes that as technology and techniques improve for low carbon building so the industry will have to face the issue of embodied carbon in its materials.

“I think this building will hopefully be a catalyst and spur others to consider the materials we have,” he concludes. 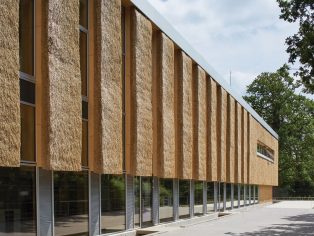 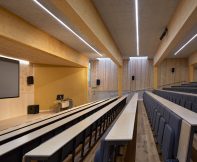 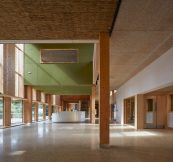