A national housebuilder has been rewarded for its efforts to reduce its carbon footprint at a prestigious awards ceremony.

Redrow Homes, headquartered in Flintshire, North Wales, won the ‘Green Award’ at the 2014 Daily Post Business Awards, which were sponsored by the Welsh Government and Bangor University.

The accolade recognised the organisation which had best demonstrated good environmental or sustainability practice by reducing energy costs, minimising waste or otherwise taking steps to shrink its carbon footprint.

“We have set ourselves a number of targets to make our business more sustainable and, while we are still working towards many of these, we are delighted that our efforts over the past year have been recognised. This award shows we are on the right track and we want to build on that momentum to take further strides in 2015.”

“Our wide-ranging achievements over the last 12 months included re-establishing our ‘green teams’, which are groups of employees tasked with making our operations more eco-friendly; introducing a comprehensive sustainability training programme for all staff; and re-structuring and improving our environmental management system.”

“We also became the first major housebuilder to partner with the Bumblebee Conservation Trust in a bid to reverse a serious decline in the UK’s bumblebee population. As part of this, we’ve made a commitment to introduce a series of eco-friendly habitats to boost insect numbers and support other local wildlife.”

The Daily Post Business Awards is one of the most prestigious events in the North and Mid Wales calendar. Every year businesses whose initiative, innovation and success deserve to be lauded have their accomplishments celebrated.

The event also honoured Redrow’s founder and chairman Steve Morgan, who was presented with an Outstanding Achievement Award to mark his 40 years of business success.

“It’s an honour to receive the Outstanding Achievement Award in what is a very special year for Redrow. We celebrated our 40th anniversary in November, a milestone we were immensely proud to reach. Today we directly employ around 1,400 people and have over 100 developments across Wales and England.”

“While it’s fantastic to look back at what we have achieved over four decades, we’re certainly not resting on our laurels. We delivered record results this year and are continuing to grow the business and strengthen our reputation as a premium quality homebuilder.” 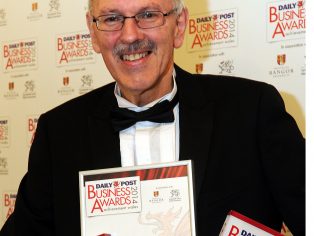