Nine Elms on the South Bank’s transformation of up to 3km of the Thames riverside with striking, modern architecture showcases glass. Michael Willoughby reports on the Riverside development

London is a city of huge inequality, with vast income differences between north and south, east and west and, even, sometimes between postcodes. Take, for instance, Canary Wharf in Tower Hamlets, or World’s End at the ‘bottom’ of the King’s Road.

But the River Thames provides another linear channel of wealth. And during the 80s and 90s, on the site of former docks and wharves, the ‘yuppie flats’ sprung up, obstinately gazing out to the river and blocking its view. Much of the water is bordered by the Thames River Path (owned by the National Trust). But those taking the nearest parallel road often don’t realise the river flows so near.

So when the project team led by Graham Stirk with Gianmaria Givanni as project architect, came to designing a riverfront scheme for the grand new quarter known as Nine Elms, surrounding the deco hulk of Battersea Power Station, he was determined to make sure that these mistakes weren’t repeated.

“We wanted to create maximum permeability through the site,” says the Rogers Stirk Harbour (RSHP) expert. “This was triangular and almost 190m deep, so we looked carefully at massing options.

“If we had developed it with the typical approach to the riverside, that would have thrown the river walk into shadow and there would have been no view of the water from the wider Nine Elm site.”

Instead, RSHP created a series of perpendicular blocks allowing everyone to get a view of the Thames, residents and public alike. These ‘step down’ from the eastern boundary of the site, from 20 storeys to 12, with the lower blocks being longer and the taller being shorter. The blocks have tapered ends, being almost prowed, like the ships on the river, so as to maximise exposure to sunlight and views up and down.

“The ends of the buildings create a serrated and perforated edge to Nine Elms,” says Givanni, “and are arranged in north-south orientation. This allows direct sunlight to the river walk as well as the public and communal spaces in between the buildings.”

The structure itself is formed of a concrete and steel frame. This Schueco system provided the designers with plenty of flexibility to accommodate a wide range of apartment types required by the developer.

“The 6.4m gridded frame gave us a flexible language with the ability to create a uniform and systematic facade,” says the architect.

Riverlight is layered in three bands: the lowest level accommodates the non residential uses such as a gym and an art gallery, cafe and restaurants. The second band is given over to a variety of apartment types which vary from studios to three-bedroom apartments. And the top is made up of penthouses which have larger floor-to-ceiling heights.

Glass has a major part to play in the story, with the facade system being fitted with glazed, sliding doors and solid panels fixed floor-to-floor between concrete slabs. The upper penthouse level has more clear glazing due to the angle of the roof and the 4.5m floor-to-floor height – versus 3m in the other flats.

Meanwhile, Riverlight’s lift cores are housed in clear glass towers so as to provide an amazing view of the river while passengers await the lift. Once inside the partially-glazed cars, they are treated to a panoramic view over London.

“We think everyone is entitled to this,” says Givanni, “The lifts allow everyone to experience the best views from the site.”

Perhaps most interesting are the simple glass balconies which, like expensive spectacles, have metal fixtures minimised.

With all the glass, it was important to introduce opaque panels in order to achieve the thermal performance of the building. Some are therefore black back painted with an insulated layer behind. Meanwhile, the solid areas are high-pressure compact laminate panels arranged as slats – drawing upon inspiration from the net drying houses in Hastings, says the architect, as an attempt to connect to the industrial past of the area, with its warehouses and wharves.

All in all, says Givanni, the glazed cladding was key – being simple and standardised, helping developer, St. James, meet its budgets, yet remaining varied and interesting.

“The components are simply fitted together, but with great articulation – the modelling of the facade creates an interplay of light and shade, yet the solid and recessed, clear glazing panels are constructed from standard components.”

And while the development is one of RSHP’s newest projects, the exposed exoskeleton draws upon the ‘The celebration of construction,’ the practice pioneered back in the 1970s.

“The project is going back to first principles, the salient elements of the buildings’ structure are expressed and inform the articulation of the building,” says Givanni.

The first phase of the project will be inhabited by the summer after two and a half years’ development. 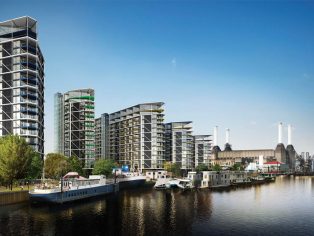 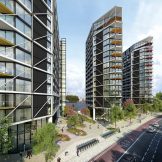