Proposals by ReardonSmith to create a hotel on one of Soho’s most prominent street corners have been given the green light by Westminster City Council.

The scheme, situated at the crossroads between Broadwick Street and Berwick Street in London, will see two 1980s office buildings demolished and a Victorian corner property – retained.

The hotel will extend over eight floors above ground and three basement levels, with the 69 guest rooms occupying floors one to six, and the two top storeys of the building set back to reduce the massing and to provide a destination bar and restaurant.

“We are delighted to have gained planning consent for a building which will add a great deal to the architectural grain of Soho while providing a hotel and restaurant with all the potential to become highly successful operations. The building is unashamedly decorative in its treatment, meeting the client’s brief and enlivening the streetscape in a way that is appropriate in this part of London,” said Patrick Reardon, executive chairman of ReardonSmith Architects.

The design references both the Art Deco and the warehouse building styles typical of the area. To create a contrast to the existing London stock yellow brick banding of the retained corner building, the new facades will mostly comprise dark coloured brick. Additional colour palettes include bronze, gold and silver, selected to provide a contrast with the dark brick and to emphasise the quality of the development.

Accessed via striking Art Deco-inspired glazed doors embellished with bronze and glazed detailing, the main entrance into the hotel will be located off Broadwick Street. Continuing the Art Deco theme, an etched glazed façade is planned to enclose the upper two storeys of the hotel, creating a jewel box-like feel to the destination bar and restaurant. 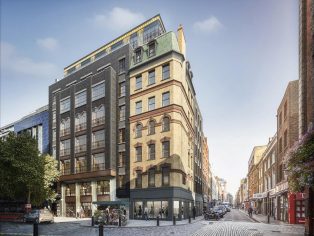 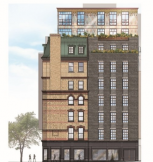