ReardonSmith Completes Ground-Breaking Transformation of Adare Manor and its Estate

Adare Manor, Co Limerick’s world-famous hotel and golf resort, has re-opened its doors after a multi-million-euro redevelopment led by ReardonSmith Architects. This included the design of new buildings as well as the restoration and refurbishment of existing properties, with the repair and enhancement of the surrounding 840-acre estate designed by ReardonSmith Landscape. The result is sensitive to the heritage of the estate as well as environmentally responsive. Both existing and new buildings have become a series of interconnecting spaces that work with the landscape as a partner to the development, affording views and offering invitations to explore the gardens, parkland and protected woodland beyond. The re-opening has been hailed as the beginning of Adare Manor’s “new legacy”, one which will see it firmly established as Ireland’s leading luxury resort.

With an over-arching vision to create a luxury guest experience and with numerous emotional touchpoints and moments of discovery, the guest journey has been master planned from the point of arrival. Here, an ornate new gatehouse, inspired by an earlier historic entrance and constructed of the same materials as existing buildings on the estate, is carefully oriented to set out the spacious landscape of manicured lawns, newly planted trees and the mature parkland beyond. The new entrance also marks the start of a winding driveway through the estate, providing magnificent views and taking guests past the tidal River Maigue and a 13th Century castle ruin before the manor house comes into view and guests eventually arrive at the main entrance.

This is the historic heart of the estate where the gardens give context to the house, provide Instagram moments and a pitch-perfect outlook from inside. The grand scale and formal character of the gardens have been safeguarded and enhanced with new parkland, garden areas and additional planting to achieve a unified character consistent with the historic setting. To the south, sits the Formal Garden, providing sweeping panoramic views. A set piece of beauty, formality and precision, the garden is a playful celebration of forms, shapes and scales, rooted in the historic layout of the past.

The manor house itself was originally built in the mid-19th Century at the height of the Gothic revival and romantic notions about a chivalric past. Both are abundantly captured, from gargoyles and symbols of heraldry to impressively decorated stone and wood carvings – all meticulously returned to their former splendour. Inside, the lobby with its soaring volume and vaulted arches has an ecclesiastical air. On the first floor, The Gallery, said to be the second longest room in Ireland at 132 feet and originally inspired by Versailles’ Hall of Mirrors, is uniquely furnished with Flemish choir stalls, its restored stained-glass windows casting multi-coloured glances of light across the space.

However, the manor house is not all about restoration of the original building. ReardonSmith has also integrated several contemporary internal upgrades and technological conveniences necessary to meet the needs of a world-class hotel today, such as a new guest lift off the Great Hall and, at the north elevation of the dining room, French doors that create guest access to a terrace and new parterre garden.

A new classically styled colonnade connects the manor house with the new West Wing which is linked at a right angle to an existing bedroom extension constructed in 1989. In this way, an area for a lawn courtyard and cloister garden has been created. Given the historic nature of the original property, the architectural design of the extension had to be approached with utmost sensitivity. This included consideration of scale governed by the mass, height and architectural character.
The locally sourced limestone used for the colonnade and West Wing is a near match to the original limestone while other new façade features and materials complement the existing, albeit with a character and finishes that are distinctly more modern and restrained. New window frames match the existing in appearance while adhering to modern acoustic and thermal requirements. The West Wing includes 42 guestrooms, a new ballroom and banqueting suite and new back-of-house areas.

The exterior styling of the new events suite follows the classical form of early 19th Century orangeries with floor to ceiling fenestration and generous internal height. The result is a space flooded with natural daylight, offering connection with the gardens outside and maximising views of the river. The new main hall can accommodate some 350 guests; it is divisible into three rooms for smaller functions. There is also a large new boardroom and a Bridal Suite as well as a new, dedicated banquet kitchen.

A change in the character of the landscape unfolds as guests approach the Ballroom, transitioning from informal parkland to a more curated and refined garden setting. Guests are welcomed by a beautiful ‘white’ garden bursting with a variety of flowering plants set amongst an evergreen structure. To the north of the Ballroom sits a Secret Garden where a new timber canopy provides shade and shelter with fire pits and seating.

Other new buildings include the spa, halfway house, clubhouse, a purpose-built services facility and an energy centre.

The spa is adjoined to the main manor house on the site of the previous spa. Its well-fenestrated stone façade follows the architectural cues of the original building and allows light to suffuse the space while a large new skylight over the pool area brings yet another perspective of the sky and daylight to its interiors. The new swimming pool and relaxation areas enjoy long-distance views of the river and the landscape, and large double doors provide direct access to the riverfront terrace.

The new halfway house stands in a different location from its predecessor to take advantage of a South facing aspect, as well as a mature tree surrounding, and to command memorable views over the countryside and the golf course. The building design concept took its reference from the clubhouse. It is constructed in stone, glass and natural slate to harmonise with the adjacent manor building and to reflect the surrounding woodland and landscape.

When completed in Spring 2018, the upgraded golf clubhouse will be a more flexible amenity than before, able to cater for increasing numbers of guests and visitors and provide dining facilities for both groups simultaneously. The main entrance portico is being relocated and redesigned to include open colonnades and a new cloisters archway, providing much needed permeability and links between the indoor and outdoor spaces for both golfers and visitors alike. Additionally, a series of new garden rooms and courtyards is being created, embracing the buildings and providing a rich variety of expansive and intimate outdoor experiences.

The clubhouse restaurant, The Carriage House, has long enjoyed a reputation as a destination in its own right. Now, a significant redesign is transforming it into an indoor/outdoor space with commanding views of the immediate landscape, putting green and the golf course beyond. Its new architectural character is based on that of a green oak and glass conservatory. A fully glazed extension over the terrace will be lightweight in appearance, replacing the previously rather austere façade with a transparent ‘pavilion’ treatment in keeping with the use and context of the clubhouse. The changing rooms, which were previously in the basement, are being relocated to the main clubhouse building, increasing comfort and ease of circulation for the golf club users, whilst also accommodating new basement staff and kitchen facilities.

The renovation of the estate grounds enhances the guest experience and, importantly, improves the biodiversity and habitat of the estate while respecting key historical elements and views across the estate. The project has included the introduction of formal parterre gardens, cloister gardens, walled courtyard gardens, arboretum planting, meadow parkland planting and swathes of new woodland habitat, woodland understorey planting and native hedgerows. Historic walkways and long-forgotten views have been rediscovered together with the remarkable ancient Ogham Stones with their mysterious markings, dating back to between the 4th – 6th Centuries. Each marking is said to denote a tree which formed an alphabet used to write Old Irish.

More than 2,500 woodland trees and 175 new extra-mature signature trees have been planted, with selections inspired by name “Adare”, which is Gaelic for “Ford of Oaks”.

“The natural, built and heritage assets at Adare Manor provide an exceptional environment of great beauty and national significance. It has been a privilege to work closely with the client in realising our shared vision for the conservation and enhancement of the estate, improving the biodiversity of the parkland and gardens and creating a truly unique and memorable experience.”

Some Project Statistics:
* Over 7000 tonnes of local limestone were used in the buildings
* 3,500m2 of natural Welsh slate was used
* 140 historic windows were repaired and refurbished
* 180 new timber windows were manufactured and installed
* Over 1km of new hedging was planted
* There are now more than 500 pieces of sculptural topiary
* And, approximately 100,000 herbaceous plants and shrubs

“The redevelopment of Adare Manor into one of the finest golf resorts in Europe was a very special responsibility for the design team. Now, a new chapter is emerging for the estate as a destination that is contemporary, unique and world-class, while honouring its rich legacy. It is one that will serve the test of time for visitors and guests over many years to come.” 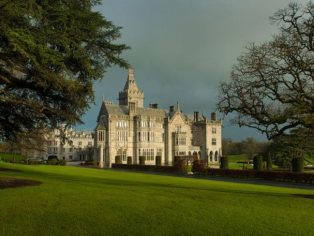 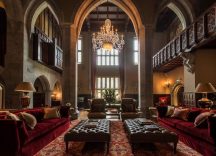