During the visit, H.E. Sheikha Al Mayassa, Chairperson of Qatar Museums, announced that the official opening date of the National Museum will be in December 2018.

The National Museum, designed by world-renowned French architect Jean Nouvel, is inspired by the desert rose. The upcoming museum will combine historic objects and contemporary influences, opening up a dialogue around the impact of rapid change. This museum will give voice to Qatar’s heritage whilst celebrating its future.

“Today marks a proud moment for Qatar as we announce the official opening date for our iconic National Museum. The museum is the physical manifestation of Qatar’s proud identity, connecting the country’s history with its diverse and cosmopolitan present. It will reflect a part of every Qatari’s life, representing our roots and identity. The opening of the National Museum of Qatar will firmly position our country on the global map as a progressive, knowledge-based economy with a long and rich history and give Qatar a voice in the world.”

Large numbers of Qatari arts and culture experts are involved in developing the National Museum. The National Museum will also open in the year that the Museum of Islamic Art celebrates its tenth anniversary, a reflection of Qatar’s long-standing investment in the arts. Mathaf: Arab Museum of Modern Art opened in 2010, and the 3-2-1 Qatar Olympic and Sports Museum will open in the next year.

HH Sheikh Tamim emphasised the importance of the Qatar National Vision 2030 and how human development sits at the heart of Qatar’s investments. The National Museum of Qatar supports this vision.

The National Museum of Qatar is built around Sheikh Abdullah bin Jassim Al Thani’s original palace, one of Qatar’s most recognisable landmarks and a building that served as a monument to a historic way of life in Qatar. This palace has a unique historical significance for the State of Qatar and has been recently fully restored. The palace will be a fitting central exhibit within the National Museum when it opens. 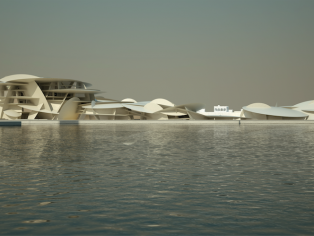