A site hemmed in by houses, a road and a hill, plus instructions that health services must continue uninterrupted during construction – Jess Unwin discovers there were many challenges for the designers of a new hospital in Dover

A series of tough challenges lay ahead when it was decided to build £23 million health facilities on the car park of Dover’s Buckland Hospital.

The site in question is sandwiched between a steep wooded bank, residential properties and a road boundary, plus it was expected that health services should continue to be provided uninterrupted by construction work.

And then there was an unexpected extra hurdle to leap when a huge Second World War bunker was unearthed by contractors working on the site!

The new two-storey development, covering 6,500m2, will eventually replace the current facilities of Buckland Hospital, situated in the Coombe Valley area of Dover.

The aim is to provide around 85 per cent of all outpatient services for the Dover district from healthcare facilities located in the Kent town. The future facilities are to include a wide range of co-located diagnostic services as well as renal dialysis services, child health ambulatory services and minor injuries services.

“Over the past 20 years, Buckland Hospital has been slowly decommissioned, with services being closed and downgraded. This has left a building that is expensive to heat and maintain, and is vastly oversized.”

He says the smaller new building will be easy to maintain and cost-effective to run, allowing EKHUFT to meet its financial targets:

“The design of the facility responds to a restricted site to provide a community hospital that is smaller but much more efficient to manage. From a care perspective, a robust clinical plan, developed in close consultation with the trust, concentrates on a rational patient journey considerate to privacy, dignity and comfort.”

Meetings with user groups helped IBI Group work out the best arrangement of multiple clinical departments, within a limited footprint, to provide the best possible quality of care and operational efficiency.

Overall, says Wickes, the hospital had to be “sympathetic to its locality and the environment”. Residential neighbours will benefit from the reduced scale achieved by dividing the building into three blocks. Those blocks are separated by vertical glazing, which means patients and staff inside will enjoy lots of natural light and views towards nearby trees. One of the two zones of vertical glazing forms the entrance atrium.

The external walls use a range of materials. Black brick and through-coloured render serves as a background for two types of cladding panels: white fibre cement panels and timber laminated panels. Wickes adds:

“The dark colour of the brick is used to enhance the crisp lines of the bright cladding as well as the shape and colours of the wooded bank.”

Besides the constricted site, another issue was overshadowing and rights of light issues along the east boundary. The roof line of the hospital was therefore stepped at the east end of the building to reduce mass and shadow. The east boundary also caused concern with regard to overlooking. Windows were carefully placed in the design to retain the privacy of both the hospital and local residents.

Although several buildings have been demolished to make way for the new hospital and to provide space for new car parking and a service yard, the scheme acquired another dimension when the decision was made by the trust to retain an existing single-storey pitched roof building that previously housed the physiotherapy department. It is to be converted into the estates services and energy centre building.

Buckland Hospital is designed to achieve a BREEAM Excellent target. To realise this goal, sustainability measures include the use of natural ventilation in as many areas as possible, with the atrium entrance in particular being used to drive a ‘stack effect’.

A photovoltaic array – a linked collection of solar panels – will be mounted on the roof, while the hospital will also boast a combined heat and power (CHP) unit to generate electricity and reclaim useful heat. Care has been taken to insulate the building envelope to an air-leakage (also known as air tightness, air permeability or air pressure testing) rate of 5.

A brise soleil architectural feature is employed to prevent summer solar gain and glazing on the east and west façade is minimised. Inside, LED lighting is used throughout.

Demolition work began in 2013 but by August works had hit a snag: a Second World War bunker. Finbarr Murray, EKHUFT’s Deputy Director of Estates and Facilities, was reported as admitting that it was known a bunker existed but that “the sheer size of the bunker was a surprise”.

Removing the wartime structure required a significant excavation operation across an area of 50 metres by 24 metres and four metres deep. Further time was given over to archaeologists, who took the opportunity to examine the ground but found nothing of any real interest.

Contractors also found asbestos under the concrete foundations of the old mortuary and pathology buildings. This material was safely removed.

The site was originally home to the Dover Union Workhouse, opening in 1836 and accommodating 500 people. Further buildings, plus many modifications and extensions, were added throughout the 19th and 20th centuries. The last major addition was the physiotherapy building in the 1980s.

Clinical services to be provided in the new Buckland Hospital include physiotherapy, radiology, pathology, renal dialysis, ante-natal and postnatal care, pharmacy and various other walk-in procedures not requiring an overnight stay.

Despite all the challenges, IBI Group is confident it is delivering a “compact but highly efficient hospital”. The Second World War bunker did contribute a two-month delay but completion is now expected in April. The old Buckland Hospital buildings will eventually close, but no decision has been made yet about the future of the remaining land.

Nicholas Wells, EKHUFT chairman, is clearly delighted the new hospital has so nearly arrived. He says:

“The new hospital is an integral part of the improvements we are making to outpatient services for our patients in the Dover area. It will provide state-of-the-art facilities, offering a wide range of services, supported by a comprehensive set of diagnostic equipment. It will provide patients with a one-stop approach enabling them to see their consultant, undertake tests, receive their results and agree their care plan – all on the same day”.

You can take a virtual tour of the new Buckland Hospital here. 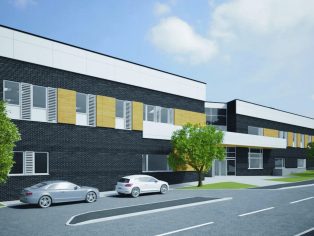 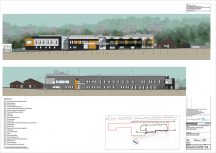