Post Tower, a 163-meter office tower in Bonn, Germany, has received the 10 Year Award from the Council on Tall Buildings and Urban Habitat (CTBUH).

The 10 Year Award recognises proven value and performance in a tall building, across one or more of a wide range of criteria, over a period of 10 years since its completion. This award gives an opportunity to reflect back on buildings that have been completed and operational for at least a decade, and acknowledge those projects which have performed successfully, long after the ribbon-cutting ceremonies have passed.

Completed in 2002, the Post Tower blazed new trails by using technically integrated design to deliver high performance. Its two elliptical volumes, with an atrium between, work together with site and wind orientation, a double-skin, operable façade, and stack ventilation to remove much of the need for mechanical ventilation commonly found in large buildings. This not only allows the building to consume only 75 kilowatt-hours per square meter per year, which is 79 percent less energy than a typical office building of its size; it also makes for pleasant interior sky garden spaces and a more efficient floor plate.

“The Post Tower was an early touchstone for sustainable tower design and has provided a very useful model through its attention to performance. The jury was impressed with the continued monitoring and proof of concept.”

The other 10 Year Finalists considered for this Award were:

All award winners, including the 2014 Best Tall Building Winners and Finalists, will be recognised at the CTBUH 13th Annual Awards Symposium, which will take place at the Illinois Institute of Technology, Chicago, on November 6. The symposium will be followed by the Awards Ceremony and Dinner in the iconic Crown Hall, designed by Mies van der Rohe.

The CTBUH Awards are an independent review of new projects, judged by a panel of industry experts. Projects are recognised for making an extraordinary contribution to the advancement of tall buildings and the urban environment, and for achieving sustainability at the broadest level.

Winners and finalists are featured in the annual CTBUH Awards Book, which is published in conjunction with a major global publisher and distributed internationally each year. 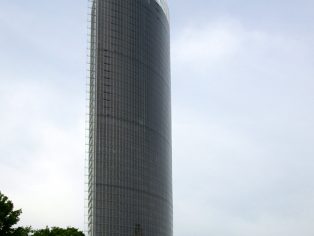