As part of an international art programme – Exchange.ie.Leipzig 2015 – the artist Sven Bergelt has created a series of artworks that define Birmingham as an urban landscape characterised by continual renewal, in an exhibition called Future Worn Out New One, sponsored by property developers Argent.

Bergelt has been working in a studio set up within the ground floor of Birmingham-based Glenn Howells Architects with the aim of creating site-specific works that explore and respond to the character, history, present and potential future of his host city. The studio itself formed a live demonstration of the working processes of the artist and the exhibition will remain on display until 23 September. As a visitor to Birmingham, Bergelt had a unique opportunity to explore the city with an unprejudiced gaze.

Bergelt has produced works that subdivide into three main strands: Archiving and preservation; symbolism; and traditions and ritual. The first work documents the visual aesthetic of the John Madin-designed Central Library, a building that once stood as an icon of Birmingham’s futurist utopianism and now faces demolition. Ironically, the debate on preservation raged when planning the 1960s building, concerning the old Victorian Houses and Factories around the Paradise Circus. The city decided to build something new, proving that history is cyclical. 96 rubbings have been taken of the library’s striated concrete façade and will be exhibited as a hand-bound book, forming a permanent archive of a building that once acted as an archive itself, soon to be destroyed.

The second work is a large-scale hoarding installed into the exhibition space. Hoardings are imposing alien interventions into city life but they are also an instantly recognizable symbol of change. On the other side of the hoarding sits three broken concrete posts with a taxidermy raven sitting on it. The raven is a mythological, ambivalent figure; a preserver of memories, and symbol of equilibrium but on the other side the warden of death – a visual representation of the end of something.

The third part of the installation symbolises the future as an architecture model, which is build out of the shapes of a bulldozer woodcraft toy. In the woodcraft toy there is the connection between the vehicle which is for demolition or deconstruction and the construction of the toy – to build something up.

“During my three month stay as an Artist in Residence, I explored the urban development of Birmingham. The changes in the city centre are visible everywhere. Master projects like the New Street Station and the Paradise Circus Redevelopment and also a lot of other projects dominates the visual image of Birmingham. The process of changing is not only a process to build something new, but also to demolish something old.”

“Sven’s work is very interesting and captures some of the process of what we do as architects. We love our city but we’re also always trying to find ways to improve it and this sometimes involves the demolition of existing buildings and infrastructure. Either way, we’re always concerned to create a better future for ourselves and the next generation.”

WERK invited Glenn Howells to be part of Exchange.i.e to add a unique rich dimension and exciting opportunity for an artist to create research based work in response to a city from within an architect’s practice responsible for planning its future. This project is part of an ongoing international artist exchange programme WERK has been developing within multiple projects since 2012 with Guangzhou, Chicago, Lyon and Leipzig. 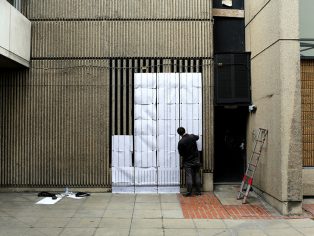