A minimalist sports pavilion and classroom complex on the campus of a Madrid university has been precision-designed by architect Alberto Campo Baeza to fill the building with light. Jack Wooler reports.

The latest project of recognised Spanish architect Alberto Campo Baeza, head professor of design at the School of Architecture in Madrid (ETSAM) since 1986, is a multi-sport pavil- ion and classroom complex for Francisco De Vitoria University.

The grandson of an architect, Campo Baeza hails from the port of Cadiz in south west Spain, a city with a rich architectural heritage and a formative environment for the architect. Campo Baeza’s career has included several notable international

projects with minimalist tendencies, embodying his phrase “more with less,” a reworking of Mies van der Rohe’s famous dictum, and exhibiting exquisitely precise design and use of materials. These range from Guerrero House and the House of the Infinite in his hometown, Cadiz, to the Olnick Spanu House in Garrison, New York.

He is often referred to as the ‘architect of light,’ and this focus on embracing light as the key design element can clearly be seen in his buildings, not least of which the

new multi-sport pavilion. In addition to the prominent motif of harnessing light, he also makes comprehensive use of whitewashing. For a minimalist house Domus Aurea in Monterrey, Mexico, for example, Campo Baeza’s design features both stark white facades and the careful sculpting of light, using a double-height interior wall covered in gold leaf to reflect light from a high southern window, flooding the room with a golden glow.

Writing on Campo Baeza’s career, elected director of the Superior Technical School of Architecture in Madrid, Manuel Blanco Lage, paid tribute to the architect’s use of natural light. “I have followed the lines of Alberto Campo Baeza’s work over the years in a long series of exhibitions that began with the show entitled, Light is More, vindicating his use of light,” wrote Lage.

Something of a showcase of his usual tropes, the architect’s gleaming white sports centre in Madrid has already been well- received, winning the COAM 2017 First Prize from the Official College of Architects of Madrid.

Having never worked with the university before, Campo Baeza tells ADF that the clients are “cultivated people,” who offered him “almost complete freedom, only limited by budget and time.” He reported that the project went “without challenge,” due to the practice’s forensic approach. “Before construction began,” he explains simply, “we studied everything.”

Directly commissioned by the university, the new edifice houses a sports centre
and a separate but linked classroom compound for related subjects taught by the university. Areas for team sports, to train in a gym, and teach students in

a more formal environment, have all been incorporated into the building. The sports complex is also intended to be utilised for other university functions, including as a meeting hall.

In terms of maximum height and alignment, the design of the building is restrained, adapted to the general layout of the campus. The architect aimed to clearly differentiate the sports and teaching areas in terms of size and the materials used on each facade.

The two main elements of the structure are joined by a low-rise building, whose roof functions as an interconnecting
patio at first floor level. The approximate floor area of the sports hall is 50 x 60 metres, and its maximum height of 12 metres is aligned with the average height of the surrounding buildings.

The teaching area sits at the north east of the site, an extension adjoining the sports hall which is accessible from both the hall and from outside doors on the north west and south east wings. Located at the back of the hall, on the other side of the internal walkway that connects the two rectilinear boxes, the teaching area matches the height of the main hall, separated into four storeys plus a subterranean zone. Above the walkway, a rooftop patio overlooks both flanks.

The architect further explains the basic layout of the building: “The classroom pavilion is organised by corridors, articu- lated with staircases.

Below the structure, a vast basement has been employed to provide extra facilities economically. The extra space includes a swimming pool with daylighting, a gym and bathrooms, creating a versatile area to accommodate a variety of university functions.

A walkway encircles the structure, with a small incline in the pedestrian link leading up from the north east to the north western and south eastern flanks. The southwestern facade features a low strip of transparent glass, in which three sets of large doors sit. The transparency is continued around each corner on the northwestern and southeastern planes, making the front of the building visually accessible from three sides, welcoming users into the building’s main feature, the “box of light.”

The square sports hall, with its combination of opaque and more transparent facades, becomes that box of light when illuminated by sunlight, or at night with its glowing wall sections.

Continuing his legacy as ‘the architect of light’, each elevation within the composi- tion has been carefully designed by Campo Baeza to control light to the users’ advan- tage. He comments that the building conforms to all normal standards, despite its highly minimal nature: “Every urban regulation was accomplished, but the simplicity of the box and its parallelepiped shape was still very effective.”

He explained that the manner in which materials were used to control daylighting was intensified during the project, and that in the sports hall volume, different approaches were taken to each elevation in terms of facade materials to enable light to enter, but at an appropriate level. The intense Spanish sunshine needed to be carefully controlled in order to make sure that in attempting to bring in huge amounts of light, the levels are not excessive.

“In the initial design,” he says, “all four facades were translucent. After many studies I decided to use two opaque facades (south) and two translucent facades (to the north), and the good results confirmed my calculations.

“The materials of each orientation are valued differently, so that the facades of the southern dihedral, more exposed to sunlight, are enclosed in a prefabricated panel, while those of the northern dihedral are in translucent glass.”

This combination of facade approaches allows for enough sun to provide generous light to the interior for the sports activities going on, without the risk of harsh reflec- tion off the many white surfaces.

Tying in with his famous degree of attention paid to capturing light, Baeza’s work is almost exclusively monochromatic, with his buildings painted in various shades of white. The sports pavilion is no exception, its white concrete finish and towering, near-featureless facades producing a feeling of pristine clarity.

This building’s visual simplicity therefore aligns it with the architect’s previous creations, encompassing the entire design, from the walls to the white-painted steel pillars and beams.

Despite what is a somewhat austere use of concrete, Baeza produces a feeling of weightlessness in his design, furthered by way the huge glass windows are flush with the building’s profile. This is a key part of how the architect keeps such a large building from being overly imposing, and in fact makes it engaging.

In Baeza’s words: “painting everything white, with a white floor in wood, produces a very friendly space, that is capable for many different uses.”

Colouring the whole space white of course increases the luminosity of the light within, and it is in the hall that the resulting sense of expansiveness is most apparent. With all the beams and concrete panels on the inside (and the outside) whitewashed, light is reflected across the ceiling, and the whole structure – despite some parts such as ducting being left unpainted, forming an impressive aesthetic unity.

Keeping the sports pavilion and classroom complex separate, but complimentary, was no easy task. The two boxes are intended for two different programmes with very differ- ent needs, while still sharing the same space.

Because of this, the two entities are unidenti- cal twins visually, simultaneously supporting each other, connected by a single base.

Being designed with lightness in mind, the pavilion utilises huge glass panels, unlike the more closed classroom complex and lower interconnecting building which have more conventional windows. Much of the exterior of both segments is glass fibre reinforced concrete (GFRC), its manufacturing method enabling construction in thin sections.

Baeza’s sports pavilion provides a striking example of GFRC use in facades for modern high-quality architecture. Unlike steel, glass fibres will never rust, and GFRC is approximately 80 per cent lighter than pre-cast steel reinforced concrete cladding. It offers greater versatility due to its compressive strength and flexural proper- ties, with virtually no limit to the shape or profile that can be created, although in the case of this project, the shapes are very straightforward.

The structure of the pavilion is made of steel, with a grid of pillars and beams on the facades and trusses which fortify the massive roof span. All of this is, of course, painted white. Wide angled beams carry the heavy load of the structure over the basement and swimming-pool areas.

The entire facade facing the central square is designed to be completely perme- able, thanks to an uninterrupted horizontal band of doors and openable glass panes. The rest of the enclosure is completed with a grid of translucent glass that illuminates the interior space with uniform light.

The guiding principle of this minimalist project appears to have been one of restraint. Both the sports pavilion and teaching complex are free of any extraneous embellishments, and as has been stated,

do not impinge on the scale of the other buildings on the campus.

Campo Baeza himself reportedly fends off any assertions that light is some kind of repeated refrain that he employs as an architect. He argues instead that light is a universal theme, inherent to architecture itself and which must form a key part of every project, and of which no one can claim agency over.

Whether or not light should be seen as his trademark, one thing is clear, that Campo Baeza has demonstrated a highly thoughtful approach to capturing it, and this box of light will illuminate sports and learning at this university in the future. 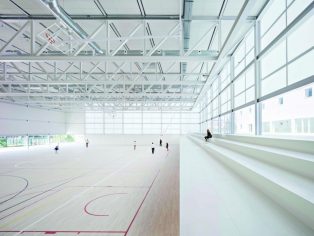 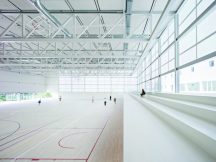 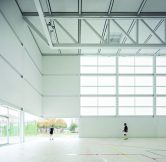 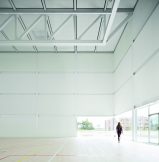 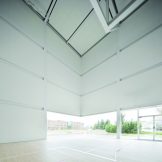