Planning submitted for Phase 3 of Snowhill development in Birmingham

The new designs by Sidell Gibson will replace the outline planning consent that was granted in 2013 for a slightly smaller office building. Both plans, in turn, replace proposals for a 43-storey residential tower and adjacent 23-storey hotel, whose construction started but was halted in 2010.

A 17-storey contemporary office building is now envisaged, which would provide 360,000 sq ft of B1 office space and 15,400 sq ft of leisure and conference facilities. It will reuse part of the aborted residential and hotel scheme, including three levels of basement car parking and the ground floor conference area. Structural cores for the earlier project had been built to fourth floor level but have now been demolished. The steel frame of the new building will punch through into new foundations, enabling existing structures to be reused.

Subject to consent, the development will start on site later this year and is expected to be completed in the third quarter of 2017.

The latest planning application follows the July 2014 announcement that HS2 Ltd, the organisation behind the high speed rail link planned between London and Birmingham, is to take the remaining vacant space in Snowhill 2. It also follows the recent publication of Birmingham City Council’s masterplan for the area.

“The development will provide high quality office space and will put the last piece of the Snowhill jigsaw in place, both architecturally and in terms of the business and employment community that is taking shape in this part of the city. Last year saw a tremendous upturn in demand for office property in Birmingham and Snowhill 3 will help to satisfy the additional demand that economic recovery and improving infrastructure is bringing to the UK’s second city.”

“Reusing part of the scheme that was aborted owing to the effects of the global financial crisis will ensure a more sustainable approach, one which will also reduce the disruptive effects of the construction phase of the proposed project.”

The scheme will meet other objectives including creating lively mixed-use frontages at street level, creating important physical links and connections in this part of the city and adding amenity space to the area. 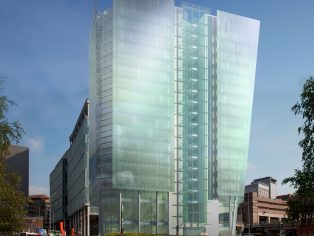