A prestigious retail scheme in London’s West End had to elegantly blend the old and new, which meant a lot to consider for the architects, as Steve Menary reports for ADF.

Not everyone strolling through central London might have noticed, but Lower Regent Street has disappeared. Not taken by aliens or demolished, but re-named Regent Street St James as part of a £450m redevelopment of a prime section of retail and commercial space owned by The Crown Estate.

Situated behind Lillywhites at Piccadilly Circus, St James’s Market was home to a forgettable London pub and was a rat run for London’s taxi drivers. But a stylish makeover designed by Make Architects for The Crown Estate and their partners, Oxford Properties has changed all that.

Make were retained by The Crown Estate to produce a masterplan for the site in 2010. It quickly became apparent that the site needed a combination of sensitive rationalising and restoration and the new buildings to have a unifying aesthetic.

Project architect James Roberts says: “Considering its location, the site was not achieving its potential, and as an aim was to attract high quality commercial tenants, we wanted to provide large floorplates with up to date specification. 1SJM has 2,200 m2 per floor, which is pretty big for the West End, and 2SJM is 900 m².”

1SJM fronts onto the new Regent Street St James thoroughfare, a part of which features a large heritage clock that dates back to the 1880s. This elevation is in fact made up of two separate buildings constructed in different periods, both of which are listed, and providing a challenge for the design and construction team in terms of both specification and construction.

Once work had begun, the clock was sent to Derbyshire to be repaired, the stonework was cleaned and the distinctive Cumbrian slate roof was restored.

Roberts adds: “The roof has a traditional random diminishing course. None of the slates line up vertically and as they go up they reduce in size. This plays on perspective from ground level and is a quality, bespoke detail which is reflected through-out the project.”

The mansard roof was rebuilt and extended by 1.5 metres to help Make achieve the internal space requirements. For the elevations that front the central public space between the two buildings, Make had greater freedom for expression, albeit within certain limitations, to try and distinguish and yet link the two buildings.

Roberts explains: “There’s an element of being sympathetic. It’s a heritage area but the area is very much founded in Portland Stone. That was our starting point and then we looked at what enhanced that palette, such as the anodised aluminium banding for example.”

On 1SJM, more than 4,000 m³ of Albion Stone’s Fancy Beach was used on precast panels. This ranged from a coarse finish on the bottom, working up to a fine finish at the higher levels with Grove Whitbed used for the plinths. The market-side exterior of 1SJM also features an artwork from Berlin-based artist David Thorpe.

2SJM, which is a complete new build, has a more modern aesthetic. Here the architects specified limestone rainscreen combined with anodised aluminium. The stone was left open-jointed and a curved Portland Stone and glass wall was wrapped around the building using Albion Stone’s Jordans Whitbed on a unitised facade. The building cuts back at the ground floor to define and enclose the central space.

Unknown to most visitors to St James’s Market, the two buildings are linked by an underground tunnel and this needed new foundations within the load bearing and vibration restrictions set by Crossrail, which will bore two tunnels near the site.

Extensive surveys and a structural 3D Revit model were also used to avoid intruding on an existing main sewer under the carriageway and to match the basement levels of the two buildings. The weight of the fabricated beam sections had to be optimised to achieve the dynamic response requirements of the floor slabs.

“We decided not to create a cruciform as that would not give people a reason to dwell,” says Roberts.

Fellow project architect Rebecca Thomas adds: “A big part of the masterplan was to bring pedestrians to the area.”

St James’s Market opened in late 2016 and with new signage in nearby Piccadilly Circus tube station and streets opened to passers-by, the site is beginning to attract visitors. A host of upmarket retail and restaurant chains have moved in, including leather retailer Aspinal, ASSOS of Switzerland, Paul & Shark and SMEG.

Roberts explains: “In terms of the retail, The Crown Estate has gone for a unique offer, whereby the retailers cannot have another unit within a certain distance.”

This has attracted a much more exclusive and upmarket retail tenant contingent than might traditionally be expected and the interior fitout reflects this.

In the office reception of 1SJM, visitors are greeted by two further giant Thorpe artworks and an impressive stone reception desk, but the main focus is a cantilevering staircase clad in Corian. In 2SJM, the decor on the entrance area is very different, featuring hardwood panelling.

Roberts adds: “The timber cladding in 2SJM is reminiscent of a timber-lined drawing room. The benefit of the natural material is that in 10 years’ time, it won’t look the same.”

“The timber panelling is from Great Windsor Park, which is owned by The Crown Estate. It is from London Plane trees which needed to be felled anyway, so it was a great opportunity to work closely with a quality material that we knew the full back history of.”

Balfour Beatty, which won the £87m contract for the construction, retained a specialist consultant, KLH Sustainability, in a bid with Make to secure BREEAM Excellent status for the project.

A policy termed ‘closing the loop’ was developed. Stone was quarried in Portland and frame-fitted at Ealing in west London, timber panelling was kiln dried in Grantham and fabricated in Essex, and aggregates were dredged from the Thames Estuary and landed in Greenwich before being barged up river to a concrete batching facility in Battersea.

The quest was successful. St James’s Market achieved BREEAM excellent scores in both design stage (76 per cent for 1SJM and 77.8 per cent for 2SJM) and construction stage (74.6 per cent and 72.5 per cent respectively).

The scheme has been shortlisted for a host of awards in 2017 including the Westminster People’s Choice Award, the RICS Awards, the OAS Development Awards, the New London Awards and the AJ Architecture Awards for workplace of the year.

Above the retail and restaurants are seven storeys of commercial offices and tenants range from the Carlyle Group and Formula One’s new headquarters to the State Oil Company of Azerbaijan and include an unexpected arrival: The Crown Estate itself.

“We didn’t know about that, but they obviously liked it so much they moved in,” says Thomas with a smile.

The Crown Estate has certainly been effusive about the scheme. Head of development Matthew Giles describes St James’s Market as “the most exciting scheme that we have ever undertaken in the West End.”

The scheme is the first part of a larger masterplan for the St James’s Market site. Subsequent phases are in the pipeline but they will have much to live up to. 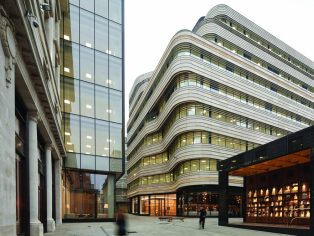 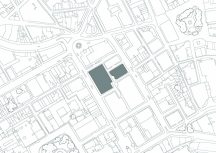 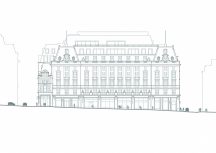