‘Passivhaus’ is a standard for insulating buildings to such high levels that energy bills fall to a fraction of their normal cost. A development in North London is among trailblazers for this technique in the social sector. Mark Smulian reports.

When the London Borough of Camden decided to demolish some sub-standard housing and replace it with new build, it had an opportunity to experiment. It was looking not only for good value for its housebuilding programme but also for a way to help tenants beat fuel poverty by providing homes that could be heated efficiently and cheaply. The solution it found was to use the Passivhaus method, which is making a small but growing impact among social landlords.

Passivhaus originated in Germany and according to the Passivhaus Trust, which promotes the concept in the UK, “thermal comfort can be achieved solely by post-heating or post-cooling the fresh air flow required for a good indoor air quality, without the need for additional recirculation of air”. This demands very high levels of insulation, high performance windows with insulated frames, an airtight building fabric, ‘thermal bridge free’ construction and a mechanical ventilation system with highly efficient heat recovery.

Passivhaus was first used to build homes in Darmstadt, Germany in 1991 and its originators now claim some 30,000 have been built worldwide, including a research station in Antarctica.

The institute claims that feedback to date shows homes built to its standards are delivering on the aim of a 75 per cent reduction in space heating requirements.

Confusion can arise between Passivhaus and the Code for Sustainable Homes and BREEAM ratings. According to the Building Research Establishment:

“In reality the distinction is quite simple: Passivhaus is a specific energy performance standard that delivers very high levels of energy efficiency, while the Code and BREEAM are overarching sustainability assessment ratings which address a large number of environ- mental issues.”

“These standards are by no means mutually exclusive; sub sections within these sustainability standards account for Energy and Carbon Dioxide emissions, which are the most heavily weighted and most difficult to achieve.”

There is also a relaxed Passivhaus standard for retrofits called EnerPHit.

Passivhaus may sound as though it involves some very complex techniques to achieve such standards, but the reality is the Camden project was a fairly straightforward piece of building work, says Ivan Christmas, the council’s senior devel- opment manager.

The £10 million Chester Balmore project, which takes its name from the nearby junction of Chester and Balmore Streets in Highgate, was the first to be developed for new housing by Camden in more than 20 years and is among the largest UK housing developments to achieve the Passivhaus standard.

Chester Balmore is characterised by stacked maisonettes, maximising the number of dwellings with access to their front doors from the street. Built at a density equivalent to 220 units per hectare, the development comprises 53 new homes, of which 23 units are for council rent, four for shared ownership and 26 for market sale.

The council takes fuel poverty seriously, so it wanted the development to help it to combat this problem. Christmas explained:

“More and more people are finding it unaffordable to keep their home warm as fuel prices rise faster than incomes.”

“This is having a major effect on the health of the very young and the elderly, in particular.”

“For those on fixed incomes, like many council tenants, the issue is becoming critical. People in fuel poverty spend more than 10 per cent of their income on energy for heating, lighting, and cooking in their homes.”

Camden’s planning policy includes provisions to ensure that new homes are energy efficient, though it does not directly refer to Passivhaus. Christmas explained:

“At Chester Balmore a heated towel rail in the bathrooms is the only means of conventional heating. This means we not only save the capital cost of providing central heating plant but also the costs of maintenance, too.”

“Passivhaus buildings achieve a 75 per cent reduction in space heating requirements, by super insulating the building fabric and making it exceptionally airtight.”

“For example, we have 250mm insulation in the walls at Chester Balmore, which are almost half a metre thick and windows are triple glazed.”

In the temperate UK climate, ‘mechanical ventilation with heat recovery’ needs to be installed to satisfy the performance requirements of the Passivhaus standard. This is done to provide sufficient fresh air, avoid draughts and discomfort and to reduce energy demand. Without heat recovery, ventilation would lead to unnecessary energy demand and can cause thermal discomfort, Christmas says.

Instead, fresh air is drawn in through a heat exchanger, past the stale air being extracted from the building.

The heat exchanger is designed so that the exhaust air warms the incoming outside air, before it finally leaves the building, but the two air streams do not mix, maintaining high standards of fresh air supply throughout the home.

Two low energy fans are use to circulate the fresh air    throughout the homes, one to supply and one to extract.

“The fans only consume a fraction of the energy that the system manages to ‘harvest’ from the stale air.”

“Measurements have shown that they can save more than 10 times the amount of energy that they use.”

If the basic idea of Passivhaus is simple and the construction techniques not terribly unusual, its arrival in Camden was still enough to scare off a large percentage of the housebuilding industry, a possibly shortsighted move given that Passivhaus is growing in use in the social sector.

Chester Balmore originally had 26 homes and 1,000 sq m of retail space, much of it empty. The homes, dated from the 1970s, were built with asbestos sheeting and had very little insulation, so the council concluded no worthwhile refurbish- ment could take place and they should be demolished. That left a site with old foundations to either dig out or design new ones around, but nothing particularly unusual except for a slope from north east to south west, which influenced the design.

“Using Passivhaus for the first time meant we tendered the project as both a conventional Code for Sustainable Homes Level 4 one and as Passivhaus, and decided to see what we got.”

“Three of the four bids put in quite a high risks margin for Passivhaus and so we chose Willmott Dixon, which did not. They are founders of the Passivhaus Trust and like us wanted a demonstration project having never done anything of this size.”

“There were very few other examples around; this has been the biggest UK project to date though I think it will shortly be overtaken. We were breaking new ground with it. It doesn’t require different techniques just greater attention to detail in the building process.”

Camden originally sought a builder with a track record in Passivhaus, but found no firm yet possessed this in the UK.

“Building with Passivhaus is just a question of supervision, doing the right thing and getting the right contractor who can then organise a lot of subcontractors and supervise them,” Christmas continues.”

“It’s the greater supervision that is the issue rather then the techniques, its still traditional construction.”

The structure is reinforced concrete in situ with a traditional brick and block structure but the cavity in the wall is 250mm wide and filled with polystyrene, and with resin to stop it slipping. Being built to Passivhaus standards, the blocks have a parge layer, like a cement render, to make them airtight.

At the heart of the site is a central garden that some flats give off while others are on three surrounding roads. The maisonettes interlock in different configurations to make maximum use of the site.

One issue that arose was the education of the flats’ occupants in how to live the Passivhaus way. They were given guidance and a video, but some things are counter-intuitive.

“We knew it would stay warm in winter, but keeping cool in summer was more of an issue. Its best not to open your window and let hot air in during the day, for example; you open the windows at night.”

Scientists from University College London are monitoring the performance of Chester Balmore to see if it meets Passivhaus standards. Christmas is confident it will. He said:

“I think this is going to become mainstream.” 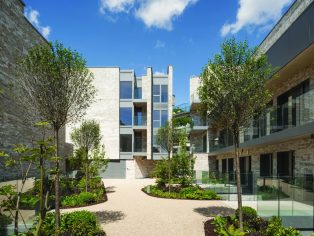 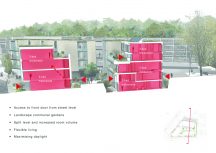 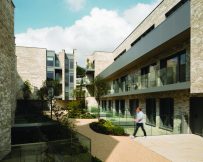