The latest modernisation of its manufacturing facility in Bridgnorth, Shropshire was developed at a cost of £150,000 to support its Air Diffusion range of internal ventilation grilles and diffusers. It is expected to pay for itself within 18 months at current rates of production – with monthly savings calculated at around £8,500.

Air Diffusion began manufacturing grilles and diffusers in 1972 and is now recognised as one of the UK’s leading manufacturers of air distribution products. Until the start of this year, it was sending all products to an external paint plant for finishing, but by bringing the painting in-house it has dramatically speeded up the process and cut lead times for customers.

With special ‘bespoke’ products, the improvement is even more dramatic as internal painting means the lead times can fall significantly and any defects can be remedied within minutes. .

“The improvement has surprised even us. We worked on the premise of 65 units a day going through the system when we were designing the paint plant because that was the number we were doing at the end of 2015.”

“In fact, we have kicked off the new facility on more than 100 units a day. This means the payback on our investment will be even quicker and, we are delighted that the plant was able to cope pretty easily with the increased capacity.”

The plant consists of two bays that allow the process to switch between different colours rapidly or to double capacity if there is particularly high demand. 80 per cent of the units are painted white, although this has fallen from 90 per cent as the Air Diffusion sales force have taken advantage of the greater flexibility offered by the plant to give customers a wider choice of bespoke colours.

The facility was designed with environmental protection in mind as it uses only powder paints avoiding any solvents, which can contaminate the water table. There are also no potentially harmful VOCs (volatile organic compounds) associated with the Air Diffusion paint process.

The plant is designed with a recovery system for the powder which recycles overspray, significantly reducing any wastage in the process.

“It has been a revelation. We worked closely with expert consultants when designing the paint plant and have recruited a specialist to carry out the painting – and there is more training planned.”

“The biggest challenge was actually creating the space in the factory for the new plant as we were particularly busy last year. All that work is paying off now because we are easing a lot of the pressure on the production process by being able to complete units in-house.” 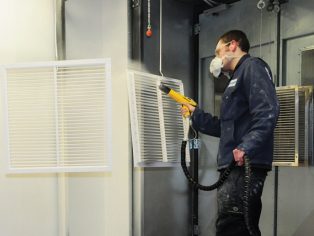