Orms appointed by Duchy of Lancaster to redevelop Norman House

Following an invited competition, the Duchy of Lancaster has appointed leading London-based architecture practice Orms to examine the possibilities for a refurbishment and extension of Norman House.

Built in the 1930s, Norman House forms part of the historic Savoy Estate which has belonged to the Duchy since the 13th century. The 43,000 ft² building occupies a prominent position on 105-109 Strand in Central London and is situated only a stone’s throw from King’s College and the London School of Economics, two of the UK’s most prestige universities, Somerset House, one of London’s most visited cultural institutions, as well as in close proximity to popular retail destination Convent Garden.

Orms is working in close collaboration with the Duchy and their agents to develop plans for the future potential of the building.

“We are very excited about the prospects for this historic building. We aim to create new high quality office space at Norman House that will meet the requirements of the modern day occupier and revitalise the building.”

Mike Andrews, Head of Commercial who manages the Urban Survey for the Duchy of Lancaster added:

“The Duchy of Lancaster recognises the historic importance of the Strand as part of the Savoy estate. Any proposals we take forward must therefore be based on achieving a genuine balance between the preservation of our historic buildings and a contemporary response to the changing needs of our commercial tenants. We are confident that Orms will deliver this at Norman House.” 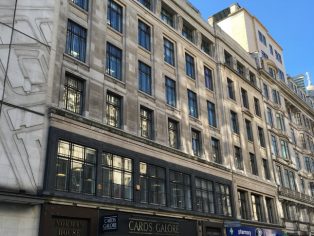