With the troubles now hopefully consigned to Northern Irish history, a new political consensus has emerged that is aiming to heal wounds scarred by decades of conflict and unite Ulster. That is transferring into sport with the building of a new national stadium for the Gaelic code.

In 2009, the Northern Ireland Executive promised to help meet the needs of all three main sports in Ulster. Although rugby union and football share the new Aviva Stadium at Dublin in the Republic of Ireland, in Northern Ireland the three main sports play separately: football at Windsor Park, rugby union at Ravenhill and Gaelic sports at Casement Park.

After the NI Executive promised their support, the Ulster Council of the Gaelic Athletic Association (Ulster GAA) published a report, Ardú Bhéal Feirste, laying out the need to develop Gaelic sports in urban centres, particularly the Northern Irish capital of Belfast, which has a population of around 580,000 people.

The redevelopment of Casement Park was at the heart of this report. At present, the ground can hold 32,500 fans but the ground is run down. Ulster GAA’s requirement was for a comfortable, safe, secure, operationally efficient stadium.

Redeveloping Casement Park would not work for a variety of obvious reasons. The main stand fabric is at the end of its operational life, the stadium is visually poor with uncovered, hard terracing and lacks corporate facilities. The turnstiles are out-of-date, the evacuation capacity is poor and the floodlighting spills onto surrounding properties.

What the Ulster GAA wanted was a 40,000 all-seat stadium to cater for hurling, camogie, Gaelic football, rounders, and handball in a project that has become about more than a building scheme. Sports Minister Carál Ní Chuilín says: “Stadium development is not just about sport and the benefits associated with sport. It is also about maximising social opportunities around major capital investments.”

So with a major rebuild proposed, Ulster GAA set out on a long planning and design process by recruiting RPS as planning consultant and then assembled an Integrated Consultancy Team (ICT), which was formally unveiled in September 2013. The team also included Cosarc Design Group as local architect, plus Gardiner & Theobald as project manager, Franklin & Andrews as cost consultants, pitch designers STRI and Tricon.

At the same time, Populous – designer on a number of venues at the London 2012 Olympic Games – were recruited as the lead architect. Populous principal Mike Trice says: “The ICT comprised Mott as contracting body. They are employed by the client and everyone else is sub consultants.

“The award of the project followed a section process based on fee and quality. Quality was based on answers to project specific questions and experience.”

The redevelopment will centre on a pitch measuring 144m by 88m pitch, which is the same as the most famous Gaelic sports arena, Croke Park in Dublin.

The brief set by Ulster GAA to the design team was to be sympathetic to the local environment and surroundings and also reflect the ethos of the Gaelic sport itself. The local environment is particularly important for the design as Casement Park is surrounded on three sides by housing, mostly two-storey red brick homes, along with a terrace of shops that are half a storey lower than the existing stadium.

To mitigate this, the design team proposed that fans should enter solely from the Andersonstown Road end of Casement Park to limit disruption to residents. The design is also as low as possible to maintain light to surrounding residents and limit overshadowing. The pitch level has been set as low as economically feasible, but this element of the design has not been helped by a low water table.

The design produced by Populous and the rest of the ICT centres on three main elements: the plinth, the cloud and the truss.

The specification for the plinth is for a ‘robust masonry system’ that responds to the scale of the urban environment and in particular nearby housing and retail buildings. According to the client, the concept behind the plinth is that it represents the ‘solid foundations and the strength of the GAA as a community and volunteer based organisation’.

The cloud element of the design aims to minimise the impact of the stadium through reflection with the design specifying a light, translucent material. The truss is intended to be an ‘architectural and structural triumph in stadium design’ and picks up on the design at another major stadium redevelopment at Wembley Stadium in London, where Populous was also involved.

In Belfast, the GAA pitch at Casement Park is as wide as a football pitch, which means there is a need for spans of more than 200m. The design from Populous and the ITC specifies an elegantly engineered truss to support the roof of the stadium with a view to create an image that will be visible across Belfast’s skyline.

For Populous, there was an inherent contradiction in the brief. The client wanted the lowest building possible to minimise the impact on local residents, but, as the architects’ acknowledge in their design statement, Ulster GAA also wanted to ‘address the lack of presence on the Andersonstown Road and wanting to create a structure that becomes a landmark for the area.

The solution proposed a balanced west and east stand. The west stand will be made larger and the east smaller. To keep the west stand within the lighting envelope set by BRE site planning and layout guidance , the whole building is pushed over to the eastern boundary of the site.

The design then proposes a large capacity north stand up to the limit of the lighting envelope with the south stand the smallest and featuring the smallest amount of accommodation at the rear.

The design also includes four squares along the Andersonstown Road, which will provide 1,000 sq m of space for up to 2,000 spectators to gather before and after games. When the project gets onto site, the redevelopment is expected to generate more than 1,500 construction jobs and, on completion, will also feature 2,000 sq m of community space, reflecting the concerns of the Ulster GAA to engage with the local community.

The winner was a joint venture between Buckingham, an English firm that built the £30 million velodrome used at London 2012, and County Derry-based Heron Brothers. The joint venture was named Heron Buckingham.

In the Autumn of 2013, the client was hopeful that the stadium could be completed by September 2015. The award of planning permission at the end of that year seemed to mean the project was on track, but a local residents group, the Mooreland Owenvarragh Residents Group (MORA), had long been expressing concerns over the project.

The Ulster GAA had carried out a number of public consultations and had been working with MORA since April 2012, but the residents remained dissatisfied by the scale of the rebuilding work.

Instead, MORA want a venue with a capacity of between 20,000 and 25,000. When planning was formally approved, the residents disrupted the announcement.

Citing a technicality that the Department of Environment treated the scheme as a stadium instead of a mixed use scheme, MORA succeeded in late May 2014 in persuading the High Court to undertake a judicial review into the granting of planning permission.

The hearing will take place in September 2014. Populous and the rest of the ICT may ultimately need to downsize their plans for the stadium in terms of capacity but the inspiration for the project will remain. 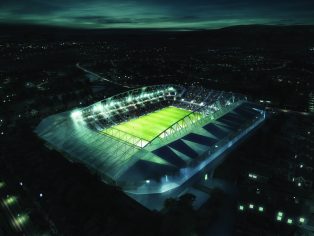