“De Rotterdam is an exercise in formal interpretation that is at once reminiscent of an imported mid-century American skyscraper, but epitomizes the off-center experimentalism of modern Dutch art of the foregoing century. The nighttime twinkling of the lights indicating different programs throughout the day lends dynamism and contributes to the humanization of the monoliths.”

“Fifteen years ago this building was designed to accommodate the changes which inevitably occur with a project of this size. Still, the realized building looks a lot like its initial sketch. With De Rotterdam we are very proud to have produced a building concept that turns out to be uncompromisingly flexible…”

De Rotterdam is conceived as a vertical city at the Wilhelminapier on the edge of Rotterdam’s Maas River. Its three interconnected mixed-use towers accommodate offices, apartments, a hotel, conference facilities, shops, restaurants and cafes. The project began in 1997. Construction started at the end of 2009, with completion in November 2013. The towers reach a height of 150m, with a gross floor area of approximately 162,000m2, making De Rotterdam the largest building in the Netherlands. It is part of the ongoing redevelopment of the Kop van Zuid, Rotterdam’s old harbor district next to the Erasmus Bridge, and aims to reinstate the vibrant urban activity – trade, transport, leisure – once familiar to the neighborhood. 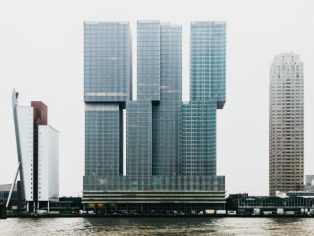