The team responsible for creating two vast and complex wall tile murals in the Queen Elizabeth Olympic Park, London, has just won a top honour for its outstanding achievement. The Award was presented to the UK tile manufacturer and co-ordinator of the project Craven Dunnill Jackfield by the esteemed Worshipful Company of Tylers and Bricklayers, which names just a single project every three years as the winner of its Triennial Award for Wall and Floor Tiling.

The Award recognises the outstanding skills of the team involved, including artist Clare Woods, tile manufacturer and project co-ordinator Craven Dunnill Jackfield, and tiling contractor Miller Druck International Stone Ltd. The prestigious project had to meet tight budget and time constraints, set by the Olympic Delivery Authority. The sheer scale of the murals (757.2m²) and the exacting interpretation of the artwork caused countless technical challenges throughout the two year project. Over 30,000 ceramic tiles, in a multitude of shapes and sizes, were supplied by Craven Dunnill Jackfield; many involved new ceramic tile decorating techniques, developed specifically for the project.

After the presentation of the Triennial Award, Adrian Blundell, Head of Production at Craven Dunnill Jackfield, commented:

“This was a high profile and exciting project, a golden opportunity to demonstrate Jackfield’s unique mural expertise on a world stage and we succeeded, creating stunning works of art which are now part of the Olympic legacy”.

Craven Dunnill Jackfield is a specialist UK manufacturer, best known for hand-making authentic, encaustic and geometric tiles for major restoration projects such as The Palace of Westminster. Since the completion of the Olympic Park wall tile murals, the company has expanded its mural capacity and undertakes contemporary styled wall tile murals both in the UK and overseas. 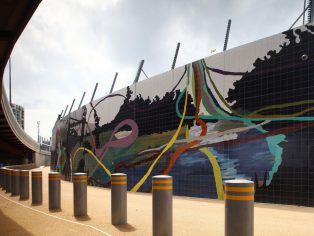