Not quite 50 shades of grey

Brick is the key to how the environmentally conscious city of Cambridge, with its university and numerous historic buildings, has just acquired a newcomer nestled among listed buildings that boasts of being the greenest office building in town.

Named 51 Hills Road, it has filled in a site on the main link between the city centre and the railway station, pulling off the difficult trick of creating a modern and sustainable structure that fits harmoniously into a conservation area with listed buildings to three sides.

All this had to be achieved on a comparatively modest budget of £1.5 million, which did not allow for anything unduly elaborate in the way of sustainability technologies.

It is lost in the mists of time how and why Jesus College came to own a site quite some distance from its own campus on which a large villa stood but was demolished in the post-war period.

Whatever the cause, the college wanted the long-derelict site used for a speculative office development. The distance from the college itself meant that it was not suitable for academic use.

The result is a brick clad building that is claimed as being Cambridge’s greenest office block, and which has been designed to use predominantly grey shades of brick so as to blend in with the surrounding listed buildings while also having a distinctive look all of its own.

Variations on the brick around a concrete frame use subtle changes of colour to create interest and avoid a uniform appearance, with random brick patterns used on the building’s two chimneys.

Gort Scott Architects has secured a BREEAM ‘excellent’ rating for the 880 square metres building and it has been nominated for a series of awards including by the Royal Institute of British Architects, the Royal Institution of Chartered Surveyors, the Cambridge Design and Construction Awards and the British Council for Offices Awards.

The site lies within Cambridge’s central conservation area and several previous attempts by others to develop it had failed to secure planning permission due to concerns about their visual impact Director Jay Gort explains that he had to design something that would relate to the surroundings.

On one side is the modernist Highsett, a residential complex built in the early 1960s and designed by the noted architect Eric Lyon.

Behind it are the Claremont model houses built in the 1850s, and at the other side a former Victorian hotel, now in retail use.

51 Hills Road is the resulting L-shaped building, which uses a warm grey brick cladding, blending with the surrounding built environment.

The entrance is via a colonnade and through a landscaped walled garden, and all four storeys are designed to be naturally ventilated, allowing high levels of control for the occupier and greatly reducing running costs.

“The site is in the main road and I was very interested in how our building relates to that street,” Gort says.

“There are listed buildings on three sides, and basically the design proposal continues the garden frontage of Highsett and relates to the hotel next door.”

He says the relationship to Highsett is shown in the tonality of the grey brick work,

“but there is also liveliness in it, with paler colours that change in different lights.

“It rhymes nicely with the texture and tonality we see in the tiles in the front of Highsett and relates to the Cambridge stock brick in the other buildings next to it, which have a soft wash over them from years of ageing.

“There are also darker things in the brickwork, with an almost aubergine colour to them, and that kind of richness was carefully chosen.”

The older adjacent buildings, as is common with Victorian structures, have substantial chimneys.

Since the potential for sound pollution from the noisy street made traditional cross ventilation unsuitable, Gort Scott designed natural ventilation stack chimneys for 51 Hills Road that complement their neighbours and draw fresh air across the floor plates.

“One of the key architectural features is the two chimneys on the building. These anchor the building and relate to the historic chimneys next to it, they are of similar proportions but punctuate it.

“The chimneys are picked out by a random arrangement of bricks giving it almost like a quarried texture with both carved statue smooth bits and rough hewn ones too, almost ‘hit and miss’ brickwork”.

These chimneys are not just a visual feature, but a key part of 51 Hills Road’s claim to be Cambridge’s greenest office building.

“It is rated BREEAM ‘excellent’ and secured a very high score in that category.

“What happens is that the chimneys draw air from the garden to the rear through the whole building, in the same way a chimney with a fire works, through the ‘stack effect.”

The chimney ‘stack effect’ may evoke vague memories of school science lessons for some. It depends on different densities between hot and cold air creating a flow up through the chimney as natural phenomenon.

“We really wanted to avoid mechanical ventilating and so it has no air conditioning, which is really rare for an office building.

“You can open the windows but that is for emotional effect if it’s really hot, you do not have to open them to keep cool, not even in summer time.”

Concrete in the building is the key to how it is heated and cooled without air conditioning. At night cool air can be drawn in from the garden through vents that automatically open during warmer weather and inside the exposed concrete used absorbs this and then in day time the concrete lets cool air out again to the offices.

“The concrete also gives a robust feel, and there are oak-lined windows with aluminium frames to the outside giving a ‘raw and cooked’ feel.”

“has a really great thermal performance and in air tightness it’s really extreme, it passes all tests”. Windows are set back two bricks depth and blinds allow for solar shading.”

The building is on a concrete frame floor with a raised access floor below which all the services run.

A slightly recessed top floor of white pre-cast concrete slabs is built on structural glulams and creates a moment of contrast.

Space in the building has been taken by local property firm Tucker Gardner.

Despite the praised design and sustainability features, the project was not all plain sailing, and there were objections to be overcome, although ultimately this proved to be possible.

Conservation area status, and the existence in Cambridge of an articulate population protective of the cityscape, had seen a petition launched when the project first went for planning permission which objected “to the insertion of a high density office development into a sensitive conservation area comprising primarily residential uses.

It went on to describe the height and massing as giving an appearance that “will appear overbearing to Highsett residents”, with loss of light and rooms overlooked.

“Jesus College is delighted with the appearance, the green credentials and the economic outcome of the building.

“Both informed observers and passers-by as well as neighbours have praised the quality and variety of the brickwork and the restrained but stylish facade materials, while professionals and tenants alike have warmed to the natural ventilation and the excellent internal layout.”

For those not in Cambridge, a look at Google Maps will show that Hills Road is quite an architectural mixture of the old and new, distinguished and undistinguished. Its latest addition will surely be seen as a striking improvement to the townscape. 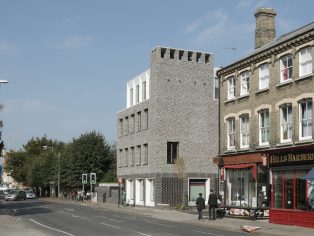