The design of a building requires synthesis of several elements – from the structure that holds it up to the material finishes that you touch and see. However, building services – security, fire prevention and ventilation among others – have rarely been seen as an integral part of the design process and considered primarily as regulatory requirements rather than design elements.

Node is a fully coordinated family of devices, interfaces, tracks, channels and networks that can harmonise building services with the overall aesthetic of the project. Designed by Foster + Partners in collaboration with Price Industries and Artemide, each element shares the same visual characteristics – size, shape and materials, while reducing technical conflicts and multiple control systems.

“Node emerged from a desire to create an integrated system for building services that offers a single flexible solution, simplifying specification, installation and operation while operating on a common platform that allows for future change.”

Devices such as sprinklers, speakers, occupancy sensors, cameras and lights are designed as a family of circular nodes, which then can be surface mounted or flush with the ceiling, with or without a trim. The multiple combinations allow designers to achieve the desired aesthetic, with interfaces that are specifically designed to adapt to different ceiling types.

The system can be adapted to existing structures as well as new buildings. Tracks allow lighting, cameras and other services to be suspended without the need to interfere with the existing structure, while channels integrate different services into a single spine that incorporates smart cable management and HVAC diffusers. The channels also have interchangeable side profiles that can be used with a range of ceiling types.

The Node network consists of a standardised wiring, power and communication system, which is controlled by a single automated platform that makes it easier to operate – lighting, HVAC and other systems can be adjusted from one intuitive wall interface. The system’s devices are intelligent and designed to be configured on a flexible zonal basis, enabling easy set-up and allowing zones to be added or removed without the need to rewire the system.

“The versatility of Node embraces ideas of wellbeing and sustainability – maximising the efficiency of the building and giving it the ability to change over time. Looking towards the future, we believe buildings will be far more responsive and data driven, and Node is a step towards creating a dynamic and smart built environment.” 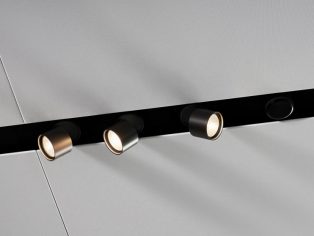