A really wild new landmark, the result of a nine-month labour of love by volunteers, was being unveiled by comedian Russell Brand in Hackney Downs this week.

The Hackney Mosaic Project has covered the walls of an old shelter in the park’s children’s playground with dramatic mosaics of animals and trees.

They were created by a team of dedicated volunteers who have been patiently placing thousands of tiny mosaic tesserae every week since January.

The sections were gradually fixed in-situ this summer before the official unveiling by Cllr Jonathan McShane, Cabinet Member for Health, Social Care and Culture, and Russell on Thursday, 6 November.

The volunteers come from the local community and from Lifeline, a charity which helps people recovering from addiction problems.

“This is a symbol of what we can achieve when we come together and work together. It’s something the community can be proud of.”

Various other groups, such as ESOL (English as a Second Language) students and mental health teams have also been involved.

Almost none of them had ever made a mosaic before but they were taught by artist Tessa Hunkin.

“The volunteers have worked with extraordinary dedication and care, coming together to create a really beautiful work that will be enjoyed by local people for years to come.”

“This is a great example of the council supporting local people to make a really positive difference to their community.”

Many of the group also made their own artwork which was exhibited in the Hackney Downs Pavilion on the day of the unveiling.

The focus of the mosaic is an animal pursuit, beginning with a mouse startling an elephant which sets off a chain reaction involving lots of different creatures.

The animals have their names written by them to help children recognise the animals and enjoy learning the words.

This is the third mosaic project to be funded by Hackney Council. Previous work can be seen at Shepherdess Walk Park, and at the corner of Old Street and Pitfield Street – recently announced as winner of the Mosaic of the Year Award for 2014 by the British Association of Modern Mosaic. 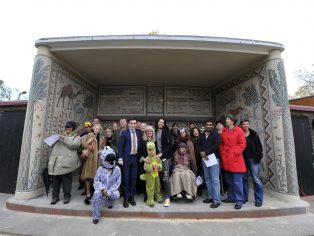