In a city that is regenerating itself, new structures need to project confidence, something the unmissable Verde does with ease, writes Ray Philpott.

Verde is an unashamedly attention-grabbing, showstopper of a building. Clad in reflective, chromatic green ceramic tiles, the front of this striking new structure resembles the prow of large ship, projecting out of the fresh, contemporary urban landscape that has completely reshaped the area’s industrial past.

Built to meet the city’s growing demand for student residences away from the suburbs, it is undeniably a statement build- ing, a million miles away in design ethos from the utilitarian accommodation so often seen in the higher education sector.

Verde sits between the rising, V-shaped junction of two major streets, and is the fourth and final phase of the £250m Downing Plaza. Designed by architects SimpsonHaugh the scheme has a series of attractive, modern buildings providing 120,000 ft² of teaching space for Newcastle University Business School, more than 1,800 student bedrooms and extensive retail provision.

Together with Science Central, a new 23-acre mixed-use development being constructed to the west, Downing Plaza forms a gateway to Newcastle city centre. Given that architectural environment, SimpsonHaugh and its long-standing client, student accommodation specialist Downing, realised Verde needed to be a visually impressive, high-quality building from the outset.

The 540-bedroom building has two distinct elements; a nine-storey ‘V’-shaped structure where Wellington Street and Pitt Street meet, and a broadly ‘L’-shaped, 10- storey building positioned to create a secure, gated triangular courtyard area bordered by the public footpath that forms the third ‘side’ of the site.

There is a seven metre fall across the site, which has been exploited by setting the ‘L’-shaped building lower than the other helping to break up the roofline and improve views from both Barrack Road to the south east and views down Pitt Street.

Entrances to both buildings are from the courtyard. One sits within a triple-height walk through area effectively cut out of the lower part of the ‘L’ building, the second located in the wide crux of the ‘V’ building.

“There’s a distinctive new-build aesthetic to the area. You have to look at Verde with Downing Plaza in mind, particularly The View, the tallest building with vivid blue colours and the exterior of the building opposite with its bold orange, strong golds and bronzes.

“We needed to balance this with something rich and vibrant. A strong green both complements those buildings, yet is outstanding in its own right and enhances the dramatic impact of the prow. Introduce a strong colour and a building becomes memorable even if people don’t know how the building is used or why the colour was selected.”

The gloss-glazed, hand-fired, clay tiles made specifically for the project by French company Terreal undeniably demand attention with their colour and finish. Most are uniformly sized, flat and smooth, some have been profiled to lean out from the side to ‘roughen-up’ the facade and create interest, fading away to smoothness towards the ‘prow.’

Similarly, strip windows on the facades not only create a linear, ship-like effect but subtly move in and out of different planes, adding further movement and texture.

Ayres explains: “We spent a lot of time modelling the facade to see how it would look and behave and, onsite the excellent facade sub-contractor, Dane Architectural, understood exactly the effect we were trying to achieve, and paid great care and attention to the detail.

“We love that serious lustre and the way light and shadow plays across it. On good, sunny days you get fantastic reflections in the facade and the building seems to almost dissolve into the sky.”

Given that decorative tiling is vulnerable to damage at street level, the base has been clad in hard-wearing, blue, smooth and wire-cut engineering bricks, in a chequered bond.

The courtyard and inward-facing facades of the building transition the building away from the green and linear theme to a silver-grey, vertical one, with aluminium cladding and glazing used to capture and throw light around.

“As you move inwards, the chequered repeating pattern of vertical rectangles stands in stark contrast to the hard, glossy and colourful exterior addressing the public highways, presenting a finish that’s more reflective in perception, materiality and spirit and is, to some extent, unexpected.

“People will be spending time in the courtyard, so it’s about playing with that scale and materials to give a different feel,” explains Ayers.

The metal facade panels have a protective coat of varnish, preserving the natural grain and materiality of aluminium, but using slightly different shades of coating to create subtle tonal differences. These panels wrap under the soffits and down to the ground, while the double-height glazing panels are actually two windows linked together to emphasise verticality.

A variety of spaces are created within the multi-purpose courtyard, enabling students to sit outside, interact or work if they want to. The landscaping needs to be robust and exude quality, so there’s a mixture of natural stone pavers, plus granites and slate finishes with planting to soften the edges. It runs through the triple height ‘cut out’ in the L-shaped building, which is supported by concrete columns.

Ayers says: “The courtyard is a fairly dramatic, unconventionally-shaped space where people can enjoy varying senses of light and shadow during the day and, when it’s lit up at night, some very interesting reflections.”

In structural terms, the building consists of a reinforced concrete frame sitting on piled foundations with some steelwork to shape the forward sloping area on the top floors of the V-shaped building and a metal standing-seam roof.

Ceramics are mounted on a metal structural frame system with combined board insulations and membrane running down the slab edge and returned on the soffit of the next slab up.

The majority of facade installation was carried out using mast climbers, but from the architects’ perspective, the trickiest part of the construction was creating the top element of the prow. Here, the building narrows to just 30-40 mm at very top, requiring a pre-formed element, including a sub-frame and tiles, to be lifted in by crane.

bathrooms, around which the sophisticated rooms are built onsite by specialist KKA interiors. While living space within the building is finished in calm tones, bolder hues are found in the spacious, light-filled common areas.

The shape of the ‘V’ building naturally dictates that the core is placed at the crux of the ‘V’, with a ground floor reception and circulation area and clusters of four rooms with shared facilities coming off at each level, and some studios installed at the narrow ends. On the ground floor the prow is fitted out as a communal area with a gym, cinema viewing area, games rooms, and general social space.

In the other building the core sits in the elbow of the ‘L’, with combined studio units and kitchens radiating out each floor, and additional six-room clusters with shared facilities on the outer ends of the ‘L’.

With student accommodation, Ayers explains how the biggest challenge is keeping the interior warm, while losing excess heat. “With lots of small, cellular, extremely well-insulated rooms heat gets trapped inside, so we control this using a combination of solar control coatings on the glass, blinds and mechanical extraction with opening windows if required.”

While most plant is at ground level, the roof plant and communal areas include air conditioning utilising heat recovery units. However, it was not economically viable to install photovoltaic cells.

Although no official BREEAM rating’s been awarded as yet, the team’s been careful to specify materials that are natural, recyclable and A-plus rated in the BRE Green Guide where possible.

The building opened in September 2016 at the start of the current academic year and, judging by the number of rooms let, appears to be a popular choice. For Ayers, SimpsonHaugh’s strong, 10-year relationship with Downing is an important element of the building’s success.

“As a private developer Downing knows the market well. They commission their own buildings built by their in-house construction company, so speedy progress and flexibility is the order of the day once a project gets the go-ahead.

“They recognise today’s students expect quality and sophistication and they tend to hold on to their own buildings, so they want something that’s going to last. That, plus their firm support and strong faith in what we do gives us the opportunity to design high-quality, adventurous buildings.”

“Until recently, Newcastle hadn’t seen much development since the 1960s. Now, there’s a massive post-industrial regeneration under way and as a part of that, Verde sends out a strong, positive message about the city’s long-term aspirations.” 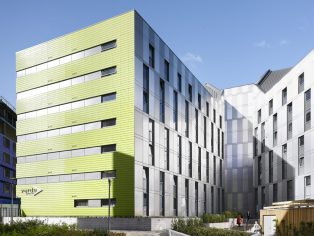 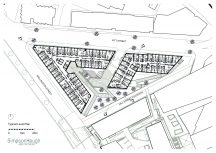 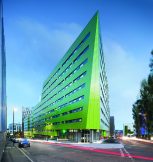 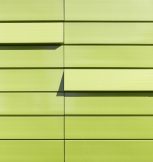 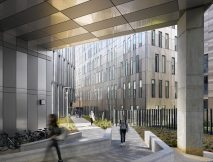