A new and innovative MMA terrazzo flooring system has been installed as part of a restaurant refurbishment project in one of London’s most prestigious locations.

Embracing the art of shared dining in the heart of London’s most iconic square, Leicester Square Kitchen offers relaxed luxury in a sophisticated yet unassuming setting.

On the edge of the Radisson Blu Edwardian Hampshire Hotel, Leicester Square Kitchen is the third restaurant from the group behind Monmouth Kitchen and May Fair Kitchen.

Close to 100 square metres of Mondéco Rapide – a new fast-turnaround seamless resin terrazzo flooring system from Flowcrete UK – has been installed by applicator partner, Milestone Industrial Flooring, in and around the restaurant’s central bar area.

Flowcrete has reinvented traditional resin terrazzo systems with Mondéco Rapide; a fast-curing, flexible terrazzo resin system, which offers a significantly reduced project downtime and can be laid over a variety of substrates.

It is a four-component system that provides a non-porous finish in a range of decorative colours. Mondéco Rapide is ideal for a variety of different environments including airports, hotels, restaurants, supermarkets and shopping centres.

Based on methyl methacrylate (MMA) technology, the system has been designed to reduce the overall installation time associated with epoxy or polyurethane resin terrazzo flooring systems by up to 75 per cent.

At Leicester Square Kitchen, installation works were completed in a small, tight and confined area, adding an element of complexity to the project for the application team.

Speaking of the installation, which was the first of its kind in the UK, Edward Booth, Sales & Marketing Manager for Milestone Industrial Flooring said,

“With traditional epoxy systems, long construction programmes, curing time and lack of flexibility mean that typically terrazzo projects slowed down construction programmes due to works having to be done in stages and trades not being able to work while the floor is being laid. By using the Mondéco Rapide, we were able to work during nights ensuring other trades could access the site in the day. The floor was protected to ensure it was not damaged but trades were able to work on top of the surface due to the product’s rapid cure time, which ensured it was able to receive foot traffic by the time day trades began.”

The installation process involved the use of Flowfast F1 Mortar to level the substrate prior to the application of Mondéco Rapide. Diamond grinding techniques were also employed to grind the Mondéco Rapide to a smooth, level surface exposing the marble aggregates. 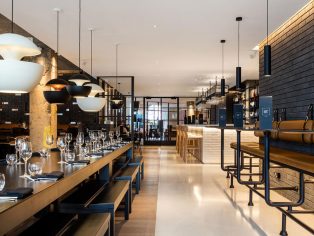 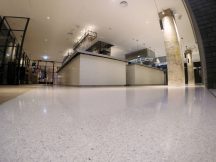