The new 1,800 seat stand fills in the South East corner of stadium, bringing the stadium’s capacity up to 30,000. The new stand imitates the North East corner, completing a continuous U-shaped stand connecting the Boothen End, Sharp and DPD Stands.

Constructed using a structural steel frame, including a long span cantilevered roof and precast concrete terrace units, the new stand has new foundations to support the additional structure after the other stands were completed in 1997.

The new stand has been designed by structural engineers WSP alongside architect AFL and delivered by contractor Andrew Scott Ltd.

In addition, a new LED screen has been installed above the South East corner, suspended from the roof by six rafters.  As well as the new stand other summer developments in the stadium include a second LED screen, disabled facilities are being revamped or upgraded, and 17,000 seats in the stadium are being replaced. As a result of the changes and the bet365 stadium has been comprehensively improved and upgraded to meet the latest requirements of Accessible Stadia and other disability related design guides.

“We’re really pleased to have helped to complete this project on time for the new season and make Stoke City’s fantastic atmosphere at home games even better. More fans will be able to attend games, including an increased number of disabled fans as the stadium now boasts the highest standard of accessible facilities.” 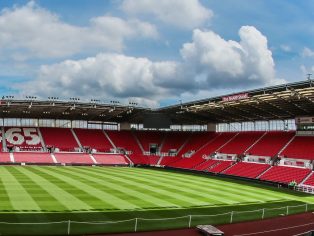