Plans have been approved for 201 new homes and a brand new library in the heart of the Wandsworth Town regeneration area.

The three sites include a nine-storey block owned by South Thames College and two buildings owned by the council – Welbeck House and 17-27 Garratt Lane.

The new development would create four new buildings ranging in heights from four to 26-storeys.

A new building facing onto Wandsworth High Street would replace the outdated Welbeck House and would be finished in red brick to reflect the neighbouring properties. It would be four-storeys at the street frontage, rising to seven-storeys further back. At the ground floor it would provide a new high street shop.

The new building on Garratt Lane would replace the existing 1960s office block and would also be in red brick with a new shop facing the street. This building would be between four and seven-storeys high.

Two larger buildings would be located within the site, set back from the streets. They would be clad in a combination of red and grey brick and will include a new state of the art town centre library.

The library will open out onto a new public square with seating and a play space for under fives.

New routes would be created through the site providing valuable links between the Old Burial Ground, Garratt Lane and Wandsworth High Street.

50 of the new homes (25 per cent) would be reserved for qualifying local residents to rent or buy at a reduced price.

There are several major regeneration projects now underway in the Wandsworth Town regeneration area including the revival of Southside Shopping Centre, Wandsworth Business Village, the Ram Brewery, Lion House and The Filaments.

The Council and Transport for London are working on a redesign of the Wandsworth One Way system which would make the town centre more attractive and pedestrian friendly.

“This is another important step forward in the revival of Wandsworth Town. The development will create valuable new connections through the town centre and attractive public spaces for the local community.”

“The new buildings along the high street and Garratt Lane are a huge improvement on the tired blocks they replace. Their design and size is much more appropriate and the new shops will make an active contribution to the street.”

“The new affordable and market homes are badly needed and the scheme will make another important financial contribution to removing the Wandsworth gyratory. This is key to reviving the high street and unlocking the town centre’s full potential.”

“Wandsworth Town is now one of the biggest regeneration projects in London with well over £1bn of new investment flowing through the area. Hundreds of new jobs and homes are being created here alongside major improvements to the local environment.” 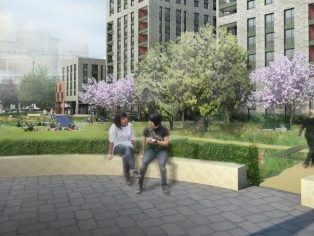 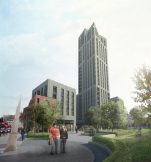