After a five-year redevelopment, Birmingham’s most important railway station has swapped 1960s brutalism for light-filled fluidity, as Ray Philpott discovers

Birmingham New Street station has been transformed with some spectacular new architectural features.

Piercing that shining exterior are three clearly defined entrances, each sitting underneath a long eye-like feature filled with media screens.

For the first time since the original Victorian station was demolished and replaced by a widely unloved and grim concrete shopping and transport complex in 1967, it’s possible to see the station as a building in its own right.

This important transport hub, for so long mostly hidden underground and largely invisible at street level, now has a strong presence in the city.

The 12 station platforms remain at their original level but are now far better lit and are finished in light-coloured cladding materials rather than concrete to create a more airy feel. They have been decluttered of unnecessary structures, and benefit from vastly improved access to and from the concourse.

The need for £750 million refurbishment became apparent in 2000 when Network Rail realised the station was clearly not going to be able to handle ever-increasing passenger numbers. The 1960s station was built to handle 60,000 people a day, now the station has a potential capacity of 315,000. The New Street Gateway project is funded by Network Rail, Birmingham City Council, Centro, the Department for Transport and the Department for Business Innovation and Skills.

The concept design for the overall project was carried out by architects AZPML, while Atkins was responsible for the internal design of the station and Haskolls for the interior design and architecture of Grand Central.

“It had to be a facade that was purely designed from the outside,” AZPML co-founder Alejandro Zaera-Polo told The Guardian recently. “We couldn’t use the inside of the building as a driver for the design, so we decided to make it an embodiment of the flows that go through it. Information, trains, people, clouds – everything that moves is somehow embedded into the facade.”

“New Street has a very strong architectural concept based on movement and reflection of movement.

“The external facade is rain screen with mirror-like cladding made from individually shaped pieces of stainless steel. This reflects people as they move underneath it, the sky and, on both the eastern and western elevations, even the movement of trains going in and out of the station.”

The sense of flow continues inside with the curves of the atrium. Wishbone-shaped steel trusses, 1.5m to 2.5m deep, support the domed areas of the roof – spanning some 40m across the concourse.

The atrium roof does not contain glass but a translucent plastic material, ETFE. This has been fritted so that, while people can see out from inside, from the outside it appears an opaque silver, helping to reduce excessive solar gain.

“ETFE is being used a lot in major railway buildings now, such as Manchester Piccadilly and Manchester Victoria,” explains Stitchman. “It has the advantage of being extremely light and durable, it doesn’t need lots of metalwork and framing to support it compared to glass, and it can be used for much greater expanses in roofs.

The steel spans are clad with light-coloured, industrial fabric stretched over them and the whole atrium is up-lit with a light-wash coming from ground level.

“Originally a solid cladding for these elements was proposed, but with the structure showing movement of up to 125mm, this might have cracked or required lots of unattractive, visible movement joints,” says Stitchman.

“Fabric moves with the structure, is easier to maintain and has enabled us to remain faithful to the original intent of the design.”

This striking central core of the station was only made possible by literally ‘hollowing out’ thousands of tonnes of concrete from the centre of the old structure – a major engineering feat.

Building the atrium required cutting out large sections of the old shopping centre’s floor and ceiling to create the space where it would eventually sit. This involved installing the atrium framework, before carefully removing the original concrete elements to create the desired internal space. This could potentially destabilise the building and required careful collaboration between demolition contractor Coleman, main contractor Mace and Atkins.

“Structurally, the original building comprised nine reinforced concrete ‘frames’ with a central frame sited directly under the atrium. The steel arch trusses forming the atrium roof structure span this removed central section, and sit directly over existing columns. Roof loads are transferred to the columns via bearings, enabling the atrium roof to move in response to applied loads. The trusses are tied together with a steel ring beam around the atrium, creating a stable but flexible roof structure. Because we were removing huge internal loads and adding external loads with the cladding and support framework, demolition and construction sequences had to be designed very carefully. We weren’t 100 per cent sure how the building would move, so we set up a global monitoring system with sensors at key points of the building to ensure its integrity wasn’t compromised.”

“During demolition we successfully removed more than 6,000 tonnes of concrete, including continuous reinforced beams and pads, without encountering any significant problems. We’re proud the station was able to continue running during the demolition process.”

Immediately below the atrium is another interesting feature. A glass light-well surrounded by wave-styled paving has been installed in the floor of the concourse, creating the effect of a pebble dropped into a pond and enabling daylight to reach part of the platform area below.

While the new architecture undoubtedly raises the station’s profile, for Network Rail it also plays a practical role in the practical day-to-day operation of New Street – ensuring it’s able to comfortably handle the 170,000 people currently using it every day. Stitchman says:

“Externally, New Street now reads as one building and internally we have also tried to make it read as one building. Before, there was no dialogue between the shopping centre and the station, now there is – the atrium brings them together.

“Since the redesign the flow of people around the station has improved, not least because we have increased the number of access points from the concourse to the platforms from two to five. The access points – comprising stairs, escalators and lifts – are all conveniently placed in the centre of the platform lengths.”

A number of airline-style ‘lounges’ have been created, where passengers can sit and wait for their trains in comfort once they have gone through the ticket barriers. These provide information about rail services, toilet facilities and cafes.

“The idea,” says Stitchman, “is that people no longer feel obliged to hang around waiting for trains on the platforms as before, and indeed, we’ve removed the waiting rooms on the platforms.

“Each lounge caters for different types of journeys being made – local, intercity or regional – and are clearly colour-coded with vinyls. Curved design elements in the lower parts of the ceiling are designed to subliminally steer people where they need to be,” says Stitchman.

On the concourse, security glass balustrades on stairs, escalators and on the walkways give people a clear view across the whole football pitch-sized concourse to improve wayfinding.

A lot of thought has gone into the sustainability of the building design, which is on course for a BREEAM Very Good rating. The building utilises LED lighting throughout and the main concourse area is also naturally ventilated to reduce energy consumption.

A Combined heat and Power (CHP) unit that generates electricity and heat from gas has been installed and linked to the Birmingham District Energy Scheme.

Excess heat produced by the plant will be pumped to offices and buildings around the station, including John Lewis, potentially cutting carbon emissions by up to 3,000 tonnes annually.

The station has a rainwater harvesting system that will supply 60 per cent of the water for toilet flushing and also boasts a 4m-high by 80m-long ‘green wall’ on the Moor Street pedestrian link on the station’s east side. With some 25 different species of plants growing on it, this interesting feature serves to welcome people while hiding a long, dark retaining wall.

“The station was a low-rise, uninspiring building in the middle of Birmingham that had no real legibility,” says Stitchman.

“Now its becoming a destination in its own right – there’s already evidence that people are travelling by train purely to shop here.

“The southern side of central Birmingham has not, so far, enjoyed the recent regeneration that other areas of the city have.

“We believe New Street will change all that.” 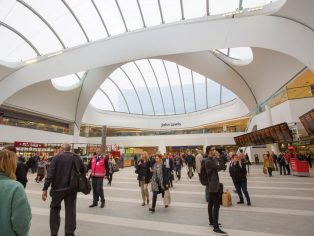 The new, light-filled atrium above the concourse is the dominant internal design feature 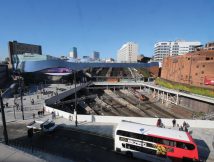 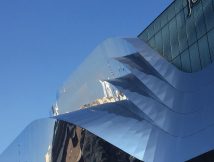