New London Architecture (NLA) – the independent forum and think tank on architecture, planning and development in the capital – today launches its 10th anniversary programme of exhibitions, research and events.

A number of new initiatives are planned to mark the anniversary, which will reinforce NLA’s role at the heart of the debate about planning the future of London in a period of dramatic growth and change. The highlight will be the installation at the NLA Galleries of a new interactive model of central London revealing the scale of proposed development in the capital.

The New London Model, which replaces the model NLA first unveiled 10 years ago, will be the biggest in the capital, covering an area stretching from White City in the west to the Royal Docks in the east. It will highlight major projects that have recently been completed or have planning permission to be built and will tell the story of London’s historical and physical development through a series of interactive projections and films.

Also in store for NLA’s 10th anniversary year, two new major pieces of research, each of which are supported by a public exhibition and events programme, will spotlight the critical challenges of public realm design and delivery (spring/summer 2015), and London’s housing crisis (autumn/winter 2015).

‘Public London: Ten Years of Transforming Spaces’, the first NLA Insight Study and exhibition (23 April – 11 July), will explore the transformation of London’s public spaces over the past decade, highlighting how the spaces between buildings are as important as the buildings themselves, and identifying how approaches to design and delivery will need to evolve to meet the challenges of a densifying city.

‘100 Ideas for Housing: How to deliver more homes for London’, the second NLA Insight Study and exhibition (October – December), will incorporate an ideas competition, supported by the Mayor of London, to identify the 100 most innovative ideas which could improve how we design, build and finance housing in the capital at scale and at speed.

In recognition of NLA’s 10th anniversary, the New London Awards will introduce two special new accolades. The Mayor’s Prize will be awarded in association with the Mayor of London to the best project that creatively contributes to the capital’s economy. Additionally, the Awards will recognise London’s 10 Best Buildings of the Last 10 Years and invite the public to vote for an overall winner.

“Over the last decade NLA has become an indispensable focus for education, debate and research about the future shape of London. With London’s population now at its highest point in the city’s history and set to hit 10 million by 2030, the role NLA plays in bringing people together to shape a better city is more important than ever. For our 10th anniversary year the team has shaped an ambitious programme of activity to address the pressing challenges of public space and housing, as well as commissioning the biggest — and we think by far most exciting and innovative — interactive model of London, showing the future shape of the city. It’s going to be our biggest year yet.”

NLA was established in 2005 as an independent forum for information and debate about architecture, planning, development and construction in the capital. Since that time it has established itself as a broker between all those involved in planning and designing the future of London and an influential promoter of positive physical change, with a core mission – bringing people together to shape a better city.

Highlights of this year’s programme from NLA include:

Now in their fifth year, the New London Awards recognise London’s best architecture, planning and development across all sectors of the built environment, judged by an esteemed international jury. To celebrate NLA’s 10th anniversary in 2015 there will also be two special new accolades, the Mayor’s Prize – awarded to the best project that creatively contributes to the capital’s economy – and London’s 10 Best Buildings of the Last 10 Years.

In April, NLA will unveil a brand new interactive model of London, highlighting major projects that have recently been completed or have planning permission to be built. Set to be the biggest of London at over 42 square meters in size, it includes over 170,000 buildings and covers 85 square kilometres of the capital. The 1:1200 model will help to further engage visitors with London’s physical growth with an interactive projection system, 3D renderings, and specially made films. Featuring a sophisticated lighting navigation system it will let users click to illuminate buildings and areas of the city, linking the curated light display to films which explore the history and future of the capital, including its major areas of regeneration, infrastructure plans and tall buildings.

Since the turn of the century, attitudes to public realm in the capital have transformed as we have come to understand the vital role that public realm has to play in creating successful places. This major NLA research project, culminating in an exhibition, publication and three-month programme of events, will explore the major changes that have been implemented over the decade, the drivers behind our shifting attitudes and how future projects will need to evolve to meet the challenges of our growing capital.

100 Ideas for Housing: How to deliver more homes for London

London has faced a housing crisis for more than two decades, a crisis which, at present levels of housing delivery, can only get worse. Despite the longevity of this crisis there seems to be a dearth of new thinking. In autumn 2015, NLA will reveal the results of a major Insight Study and ideas competition, which has been planned to highlight the most innovative new thinking which could help to unlock large scale delivery of homes in London. A three-month programme of events from October to December will include a series of talks and debates on the future for housing in London.

Don’t Move, Improve! is NLA’s annual celebration of London’s best and most innovative home improvements. The competition, exhibition and public events series highlights the best home extensions, and interior design projects, providing inspiration and free advice to homeowners at a time when creating more usable space is a key concern for Londoners, as well as promoting the work of smaller architecture and interior design practices. The annual competition opens in September with winners announced alongside a two-month exhibition in December, and a series of public events. 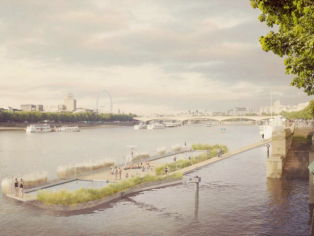