The Heritage Lottery Fund has given a massive financial boost to a project that is set to create a museum and contemporary art gallery of international significance in the heart of an ancient historic cathedral city in Hertfordshire, with 2,000 years of history to showcase.

The HLF has awarded a £2.5 million grant to help transform St Albans’ landmark, grade II-listed Georgian town hall into a gallery and exhibition space, while at the same time retaining the existing features of the building, such as prison cells and pre-Victorian courtroom.

The museum and gallery will be free to visitors and will showcase the global historical importance of St Albans as well as providing the east of England with a cutting-edge contemporary art gallery to rival those in the capital.

St Albans was once the most important city outside of London and was home to Britain’s first Saint, as well as the Magna Carta – which originated at the St Albans Abbey (now the Cathedral). The city is famous for its Roman remnants and the country’s oldest pub (c793), was home to Britain’s only pope Nicholas Breakspear, and is said to have more intact Tudor buildings than London itself.

“We are so grateful to the HLF for their support.

“St Albans has a great story to tell.”

As well as the city’s ancient history credentials, its modern history is fascinating too: the Ryder Cup originated in St Albans, brilliant scientists Sir Francis Bacon and Prof Stephen Hawking were from the city, and film director Stanley Kubrick created some of his most famous work in the area.

The project was given the support of high-profile figures, such as Boris Johnson, the mayor of London, on a visit to the city late in 2014. Johnson described St Albans as a miniature Britain. “Remarkably, there is 2,000 years of visible history in just one square mile so the new museum is a perfectly positioned stepping-off point from which to experience it.”

“This ambitious redevelopment project will create a ‘one-stop shop’ – celebrating local heritage and culture – right in the centre of St Albans.”

The overall cost of the project will be £7.75 million with the St Albans City and District Council committed to providing funding of £3.3 million.

St Albans Museums and Galleries Trust, a registered charity, is leading efforts to raise the remainder of the required finance.

Award-winning architects John McAslan and Partners have been appointed to transform the town hall space. The architects, who were involved in the transformation of King’s Cross Station, have drawn up designs to create a walkway around the building to encompass views of the medieval city.

Construction work could start as early as spring of next year with the Museum and Gallery scheduled to open in autumn 2017. 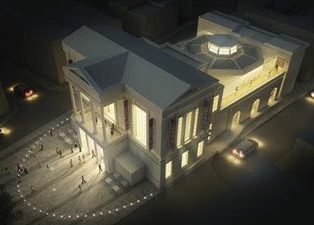