Middlesex University needed a flexible and sustainable campus to suit a diverse range of subjects and new teaching methods. Mark Smulian reports on the results.

A mathematics teacher would tell pupils that 17 into one “won’t go,” but that trick is what Middlesex University has accomplished as it has steadily shed the confusing patchwork of sites it used to occupy across north London and consolidated its activities at Hendon.

This is not by the standards of traditional university campuses a large space, and it has taken some ingenuity to fit all the requisite buildings onto it – and an investment of some £200m since this programme began in 2000 – with BPR Architects having worked with Middlesex right the way through.

The 3,300 m² Ritterman Building is the latest piece in the Hendon jigsaw.

Most people enter the campus through the main entrance, named the Rickett Quadrangle, and part of the Ritterman’s purpose is to provide a hub and focus for the far end of the campus, which previously lacked this.

There is a common perception that scientists and technologists know little of creativity, while their creative arts counterparts are dubious about using technology: put them together and they could learn from each other and find unexpected ways to collaborate.

The other idea was that people learn through practice and as advised by tutors rather than from listening only. So while subjects like fine art and dance require large spaces, in the Ritterman building, the computing, science and robotics laboratories are open-plan, designed so teachers can walk between students and advise them on their work.

There was really only one space where the Ritterman could go, which was originally occupied by a steep grassy bank giving onto a largely disused extremity of the campus.

Levelled, the site now houses a striking building, predominately in glass and shades of green tiles, inhabited by science, technology, interior architecture, fine art and dance students, along with innovations such as a machine that makes ceramic objects based on the frequency with which Tweets about the University are detected on the internet, and a robot called Baxter that can interact with humans.

Outside, the Ritterman is a large open space adjacent to its cafe, which can be used to erect art installations on plinths or simply as an open air social space outside the adjacent students’ union building when weather permits.

As building work began, a retaining sheet pile wall was installed to the eastern end of the building to accommodate the bank of earth and the base had to be sealed with a gas-proof membrane due to the presence of the naturally occurring gas radon.

The bank was demolished then backfilled after which a ground-bearing concrete slab with pile foundations was installed. Above that came a concrete frame building which was poured in-situ. Inside, the stairs are precast concrete units.

The concrete structure is based on a grid layout of columns and beams, so the interior can be divided as needed into rooms or open plan spaces.

Externally, the Ritterman is clad in a curtain walling system which contained the glazed green brick slips as part of the panels. The large areas of green tiles were sheets of brick slips which were attached to the blockwork wall construction at a lower level.

Viewing the Ritterman from most angles shows small cantilevered sections overhanging to break up the line of the building and held up by columns. These are also made from in-situ concrete with the overhanging sections supported by beams.

The first cantilevered section is supported by the three columns and a protruding beam that extends past the end of the floor, while the floor above has a beam in the central section that adjoins the central columns.

There is a basement, ground floor and three upper floors, ending in a flat roof. Smaller roof spaces on the cantilevered sections provide green roofs, part of a sustainability system which is among the Ritterman’s main features. Its flat roof is split over two levels and collects rainwater, which feeds both the living walls installed on some sections of the building and the internal toilets. There are also photovoltaic cells on the roof to generate energy.

Inside, fine art occupies the lower ground floor level, designed with large spaces and high ceilings to provide students artistic freedom as they create their works. Transport logistics have been addressed through the creation of a large doorway onto an adjacent road which allows for easy delivery of materials.

Similarly, double-height rehearsal room with adjunct changing rooms is designed for dance students on the upper ground floor. Interior architecture students, which occupy the second floor, can also benefit from double-height studio spaces on the building’s north side, which provides the best light for drawing. Moreover, art and interior architecture studios have folding walls to enable them to be adapted to different class sizes.

Science and technology can be found on all floors including facilities such as a fabrication laboratory and the mechatronics and robotics equipment distributed around flexible spaces. Technical tutor Nick Welden says:

“The space is designed so that instead of sitting in a lecture, the staff walk around as they teach – based on the idea that you will remember something better if you do it rather than just hear it.” Welden adds, “I enjoy the building because it makes you do something different. There is a lot of light and we must have one of the best views in London – you can see the Wembley Arch.”

More than just a building

There is something else unusual about the Ritterman too, the concept of the building itself being designed as a teaching resource.

As defined by BPR’s user guide for staff and students,

“As well as the physical systems and spaces in the building which we hope will support new innovation, there are opportunities for the building itself to be used as a resource for experimentation and data gathering.”

These could perhaps include analysis of sunlight falling on the photovoltaic panels to assess local weather conditions, or the efficiency of sustainable systems and monitoring of water levels in the living walls to assess weather conditions and create responsive or programmable irrigation systems.

BPR designed the Ritterman to BIM Level 2 and the 3D computer-aided design model created has been left for the University’s use in managing and maintaining the building, and for a design tool for interior architecture students and a resource for a new Masters course in BIM.

Students interested in sustainability can also learn much from the building, which has secured a BREEAM Excellent rating. Its water management system collects and distributes rainwater by channelling it into cisterns behind the toilets. Excess water is diverted down to the living roofs, which host more than 3,500 plants, to be soaked up by soils that feed wild flowers and grasses and support biodiversity.

as necessary. Any remaining water, for example after heavy rainfall, goes to an underground tank to be released slowly to the public drainage system, acting as part of a flood defence for homes on land below the campus.

All south-facing windows have brise soleil louvres to shade them and reduce the need to lower blinds, while low-power LEDs are controlled by sensor systems detecting if people are present in a room. Light levels are also monitored so that illumination grows brighter the further a light is from a window, or as light fades later in the day.

Middlesex’s vice chancellor, Professor Tim Blackman, has hailed the Ritterman building as helping the University to continue to “provide our students with a world-class learning environment equipped with the latest facilities and technology,” cementing its reputation among employers “for graduates taught in industry-standard settings with the skills they need.”

The Ritterman Building provides space, flexibility for the new teaching methods being used, and sustainability. If really radical changes are needed in future, maybe Baxter the Robot could help work them out. 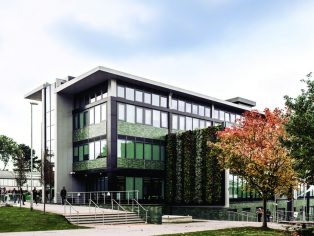 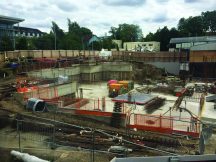