An ultra-slim solar control system has been created by Hunter Douglas, the leading global manufacturer of architectural products, to meet the demands of the most modern of building designs.

At just five millimetres thick, the minimalist Flat Bar shutter is at least 50 per cent thinner than existing alternatives on the market. Pieter van Rees, European Marketing Manager at Hunter Douglas, said the beauty of the Flat Bar shutter’s aluminium frame is that it is as unobtrusive as possible to meet the architects’ aesthetic requirements.

“Even the screws used to attach the fins are less conspicuous, as we had them powder-coated along with the fins to make sure all of the system’s components have the same colour.”

“That way, the parts used for mounting the system don’t stand out.”

The powder-coating treatment means that only the S and Z fins are suitable for use with Flat Bar; if hollow fins were used, the coating would seep in, which would affect the system’s quality.

This design innovation, which is available in all standard RAL colours to mother of pearl, has been used be dramatic effect in a minimalist-style housing complex in Brescia, Italy.

Not only does the system’s shading and thermal performance match that of other Hunter Douglas sliding shutter systems, it also guarantees privacy for occupiers as the view from the outside is obscured whilst still allowing light into the rooms. The sliding shutters can be closed manually horizontally or vertically, depending on how the shutters are mounted, or motorised. Fabio Brivio, Unit Manager for Hunter Douglas Italy, explains:

“‘Initially, Studio 5+1 Architetti Associati opted for a different solar control system, but with that one the users couldn’t block the window entirely from top to bottom.”

“That is one reason why the Flat Bar system was eventually chosen. The design played a part in the decision, too. The building’s façade has a minimalist look and the sliding shutters fit in perfectly, thanks to their slim construction.”

“Interestingly, it looks as though the sliding shutters were installed separately on the façade, rather than being integrated – another detail that matched the architect’s style: he likes to combine different materials and techniques, for instance, glued tiles, a wooden façade and a painted wall.”

The Hunter Douglas Flat Bar sliding shutter system is suitable for all applications and works particularly well with housing. Its minimalist style makes it an ideal solution for lower-budget projects. 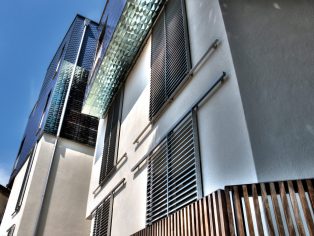