The project would see the 40 year old facilities at New Covent Garden Market in Nine Elms comprehensively upgraded with the aim of safeguarding its future.

The wholesale market is owned by the taxpayer and the modernisation would be paid for through a series of mixed use developments on parts of the site which are no longer needed for the market operation.

Across every the entire scheme up to 3,019 homes would be built along with shops, cafes, bars and offices.

Approximately 600 of the new homes (20 per cent) will be reserved for qualifying Wandsworth residents to buy or rent through affordable housing schemes.

The scheme will also provide a contribution of £91m towards improving local infrastructure in this rapidly changing part of Battersea. The money will be spent on a series of local transport upgrades including the now approved Northern Line Extension.

A new retail market would be built alongside a visitor centre and education space focused on the food industry.

New cycle routes, footpaths and public spaces will also be created through various parts of the site including two sections of the Nine Elms ‘linear park’ which will sweep right through the district.
The application also includes roof top football pitches, a gym and a doctor’s surgery.

“The market is the biggest single development site in Nine Elms and an incredibly valuable source of local jobs. Its revival is key to our vision for the area and the redevelopment of its perimeter sites will fuse together key sections of the new people-friendly environment we are creating here.”

“This project covers five distinct development plots, the largest being the new wholesale market itself which will be overhauled to provide a 21st Century trading space for the food and flower businesses.”

“The current flower market site would make way for a series of new buildings including three towers which will form part of the Vauxhall tall building cluster. At ground floor level this site will open up to the public and provide part of the Nine Elms linear park.”

“A large part of the land currently used as the main vehicle entrance to the market from Nine Elms Lane will also be released for a mixed use development and another section of linear park.”

“At the east end of wholesale market there will be a new visitor’s centre showcasing the food industry and at the western boundary the long brick wall along Thessaly Road will be replaced with a new line of high quality homes. This will be a huge improvement to the look and feel of the Patmore neighborhood.” 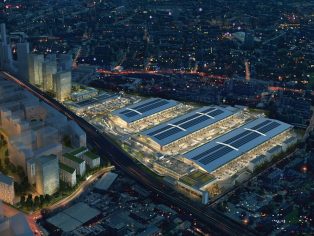