Work is underway on a £6.2million student accommodation building in the heart of Bristol city centre by Midas Construction, part of the Midas Group, one of the UK’s largest independent construction companies.

The Anchor Road project which will be known as Harbour Court, is a 4,250 sqm development for Prime Student Living, part of the Crosslane Group, which currently operates six student accommodation buildings in five cities across the UK.

Anchor Road is a prominent and sought after location near the harbourside in the centre of Bristol and within easy walking distance of the University of Bristol campus.

The 133 bedroom development will help to address an urgent need for secure, accessible city centre living in Bristol, particularly for the international academic community.

Student numbers at the University of Bristol rose by 500 to almost 20,000 full time undergraduate and postgraduates last year and a further increase is expected in the forthcoming academic year.

Harbour Court will be Prime Student Living’s first location in the south of England and reflects its focus on meeting the accommodation demands of the 24 Russell Group universities.

By the start of the 2015 academic year the company aims to manage over 5,000 rooms across the UK and Europe, with new projects planned in Edinburgh, Birmingham, Newcastle and Bristol, as well as overseas.

Midas Construction is working with architects Andrew Wotton Associates on the scheme, due for completion in August 2014 in time for next year’s new student intake. Harbour Court will provide accommodation for 133 students, split between a number of studio apartments and cluster accommodation consisting of 3-5 bedrooms sharing a kitchen.

“This is a major development in a prime location and we’re really pleased to be underway. We won the £6.2 million contract due to our innovative approach which saved in excess of £300,000 for the client and reduced the envisaged construction period by approximately 4 months.”

“There is a huge demand for affordable, secure and convenient student accommodation in Bristol and Harbour Court is exceptionally well placed not only for the University but also for all the amenities that make student life easier and more enjoyable. For our investors, it delivers excellent growth potential and the sought after exposure to a key university city. Midas Construction came to us with an innovative proposal containing many ideas we had not initially considered – they understood our objectives and it became a really collaborative process. We’re excited to be underway.”

Harbour Court has been funded by Victus Capital, a European student accommodation fund investing in properties located in the major university cities across Europe. 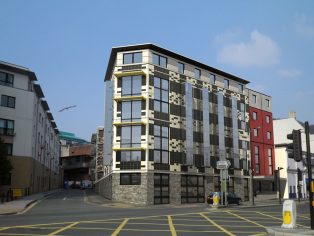