The Royal Institute of British Architects (RIBA) has reacted to the death of Neave Brown, the celebrated Modernist architect. RIBA President Ben Derbyshire presented Neave Brown with the 2018 Royal Gold Medal for Architecture, on behalf of HRH The Queen, in October 2017.

Brown was perhaps best known for his visionary Alexandra Road estate built by London’s Camden Council in the 1970s. He believed every home should have its own front door opening directly on to the routes and streets that make up a city, as well as its own private external space, open to the sky in the form of a roof garden or terrace; each of these qualities was incorporated at Alexandra Road.

“The architecture community has lost a giant. Neave was a pioneer: he showed us how intellectual rigour, sensitive urbanism, his supreme design skill and determination could deliver well-being to the local community he served so well in Camden. His ideas, for low-rise high-density housing with private outside space for all residents, still stand as a radical antidote to much of the unthinking, not to say degrading, housing product of the era.

“Neave’s contribution to architecture will not be forgotten. His vision and ideals live on in the generations of architects, whom he has inspired. All his UK projects are listed. That they are loved by their communities is clear – the residents of Alexandra Road nominated him for the 2018 Royal Gold Medal for Architecture.  His investiture, brought forward to last October, could not have been a warmer and more emotional celebration in recognition of his influential life and work. I feel honoured to have played my small part in this and my thoughts are with Neave’s wife Janet, his family and friends.” 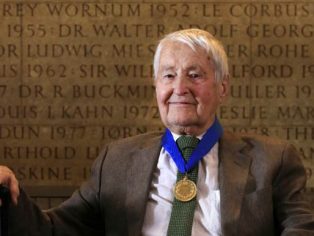