Narbonne’s museum of antiquities tops out

The president of the Région Occitanie / Pyrénées-Méditerranée, Carole Delga, in the presence of the Mayor of Narbonne, Didier Mouly and the President of the Metropole of Narbonne, Jacque Bascou, visited the new museum of antiquities in Narbonne to mark the completion of the building envelope. This was also the first opportunity for invited members of the press and elected officials to visit the site of what will be one of the most significant cultural projects in the region.

Once a major Roman port, the city of Narbonne has been continuously inhabited ever since, and has accrued an impressive legacy of buildings, ancient relics and archaeological sites. Foster + Partners’ design, devised in collaboration with museum specialist Studio Adrien Gardère, is based around the prime exhibit of the museum – a collection of more than 1,000 Roman funerary stones, recovered from the city’s medieval walls in the 19th century. Their display informs the architecture of the building, forming a natural focus at the heart of its simple, rectilinear structure. It separates the public galleries from more private research spaces, which can also be accessible to organised groups. The highly flexible and interactive display wall is naturally illuminated. Visitors will be able to glimpse the work of the archaeologists and researchers through its mosaic of stone and light. Using industrial technology, the display’s supporting structure allows the reliefs to be easily reconfigured and used as an active tool for learning.

The museum’s single storey structure with administrative offices at mezzanine level has a precast concrete roof canopy, which, inspired by Roman building techniques, provides thermal mass and contributes to a comprehensive environmental strategy. This canopy is supported by load-bearing SIREWALLs (Structural Insulated Rammed Earth) – striped in varying shades of terracotta that reflect the natural earth hues of the region. These walls also provide an engaging backdrop to the Roman exhibits within.

The practice has also created a masterplan for a public square to the north of the museum that will tie the new cultural quarter together. MuRéNA is set to become a new landmark at the entrance to the city, on a site adjacent to the Canal de la Robine. The landscaping will reinforce the connection with the water to create a tranquil, natural setting. The ensemble is inspired by formal French gardens and the Roman courtyard. It will feature an amphitheatre for open-air displays and events. As a result of the continued cooperation between the City of Narbonne and the Région Occitanie / Pyrénées-Méditerranée, there will be a welcoming, landscaped entrance via a new ramp that links the museum to the existing towpath along the Canal de la Robine. This will create a serene pedestrian connection to the city centre, which will now be only a short walk from the museum.

“With the completion of the building’s envelope, we can see the richness of the building for the first time, which is immensely exciting for everyone involved. The museum is not only an important cultural institution for the region, but it also plays a vital role in the regeneration of this part of the city. We are grateful for the support and vision of the Région Occitanie / Pyrénées-Méditerranée and the City of Narbonne.” 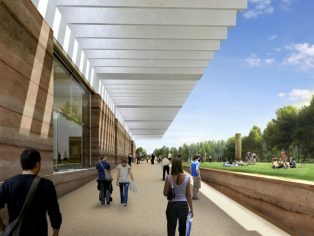 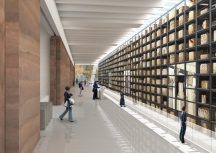