Clague’s Karl Elliott considers the role of BIM as he advocates a change to the way buildings are procured.

We are living in times when we are ever more demanding of information-rich experiences. And the fact that a gadget in the palm of our hand that can deliver this information is undoubtedly appealing.

Technology is clearly a force for change – if not always a positive one, then certainly an unavoidable one. The reality of this evolution in technology has been to reshape aspects of our everyday living and, in turn, re-shape our industries, from mining to aviation and food production, all with the promise of convenience and efficiency. We strive to make ourselves more and more competitive and the push has been a global one.

Of all the industries, construction is undoubtedly the largest and, perhaps, the most complex and demanding on people and resources. It is surprising that change in the UK construction industry has been such a long time coming despite there having been a number of catalysts for this change – including the Egan and Latham reports which laid bare a catalogue of failings.

So, here we are: Building Information Modelling – or “BIM” for those in the know – as the Government finally got its act together and mandated that publicly funded projects costing over £6 million must be driven by BIM by 2016. It seems a long time since the first 3D CAD software was available back in the 1980s; however, the technology was simply not a commercially-viable proposition and it has taken 30 years for it to catch up.

But, from the start, there seems to have been a fundamental misunderstanding that BIM is 3D modelling and this has, in the large part, been driven by the software companies pushing their all-in one BIM solutions. In short, the software companies have been allowed to hijack the definition. It is becoming more apparent that there is a great deal of regret in the industry that the term BIM is misleading and that, maybe, Project Information Management would have been a more appropriate label.

So, with the process of project collaboration and data management on the one hand and the promise of 3D CAD applications, that it is claimed will do the job for us, on the other hand, has the promise of something new simply overwhelmed our common senses?

You might be forgiven for thinking that BIM is overloaded with abbreviations that only make its comprehension unbearable for those trying to grasp its key concepts. You might also be forgiven for thinking that those people on the ground who are actually building these projects are too far removed from the processes that go on and that real collaboration is more often than not just a pipedream.

After all, we want to be able to connect with the specialists and the craftsman so that their knowledge becomes a tangible part of the end product. But this isn’t really possible unless the rules that govern their engagement are such that they have some incentive to be fully involved early on.

We also live in a world where the client is key and when the client is being dictated by capital instead of whole-life cycle costs, BIM might at first appear as an unnecessary complication to an already-expensive process that maybe they could do without. Equally, there doesn’t seem to be any real ‘buy-in’ from the people that matter. But is this all just gripe from an industry that doesn’t want to be told?

The fundamental change that has come about through the use of technology is one where we are moving away from a traditional 2D output to data-rich 3D models. As simple as this sounds, in some quarters there is fear that this is a shift away from drawing and an assault on artistic licence.

But can the architectural profession afford this nostalgia and is this what is preventing us from embracing modern procurement methods that are better suited to the age of data bytes? Does this change not open the door to a realm of possibilities we could only dream about 30 years ago – such as laser scanning, 3D printing and virtual simulation.

Whilst the architectural profession’s prerogative has always been to make things that are beautiful, part of the fear perhaps is that we will become agents of the pre-packaged building design, where creativity is watered down by modular closed panel flat-pack style architecture.

In the middle of all this are the smart contractors who are starting to make the process their own, recognising the efficiencies in having component libraries and, of course, where they can offer savings profit will follow. Maybe the key driver for BIM will be the contractor who has whet his palette and can no longer see the future in traditional procurement.

When they start to turn down ‘non-BIM’ fee bids in their numbers, maybe then we’ll see everyone running to make 3D modelling their new art.

The opportunities that this new way of working brings us are considerable and extend way beyond the building process. We can collectively start to compare asset data sets and really start to consider the life cycle of the product at the earliest stages, right through to the end user experience. 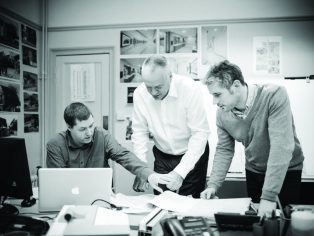