Nathalie de Vries has been named city architect of Groningen, the largest city in the north of the Netherlands. The appointment was announced during a press conference at the city hall on Wednesday, November 25. De Vries succeeds the current city architect Jeroen de Willigen, and will head the municipality of Groningen’s City Architect Atelier from 1st January 2021.

The city architect of Groningen provides advice on current urban development and architectural projects in the municipality of Groningen. She has a key role in setting the agenda and inspiring others in the public debate on spatial issues and is part of the new Spatial Quality Committee, which will be established under the Environmental Act.

“In Nathalie we have found a master builder with an understanding of both architecture and urban development – someone who can guide Groningen’s major housing projects in the right direction and at the same time can provide insight into important areas like De Suikerzijde, Stadshavens, Meerstad and De Held, as well as neighbourhood renewal, the city centre, and large projects such as the Oosterpoort and Kardinge.”

“As city architect, I would like to keep an eye on the broad outlines of the Groningen’s development and help realise the ambitious plans that the city has to improve its quality of life”, says architect and urban planner Nathalie de Vries. “Groningen is a city with a lot of guts when it comes to urban design and architecture. That courage is certainly needed to find solutions to the issues of our time: How do we ensure that Groningen remains a smart and future-proof city and that available space and facilities are distributed fairly? As my first task, I will explore all the neighbourhoods, on foot and by bike, with an empty notebook in my backpack. I hope to get in touch with as many Groningers as possible along the way.”

De Vries will combine her role as city architect with her work for MVRDV and her position as Professor of Architectural Design at the Faculty of Architecture at TU Delft. A new earthquake zone supervisory architect, Dianne Maas, was also appointed at the same time as De Vries.

Nathalie de Vries
Architect and urban planner Nathalie de Vries was born in Appingedam in 1965 and grew up in Winschoten and Pekela. At the age of eighteen she left for Delft to become an architect. In 1993, together with Winy Maas and Jacob van Rijs, she founded MVRDV, an interdisciplinary studio with a global scope that works at the intersection of architecture and urbanism. De Vries achieved international fame thanks to her varied oeuvre in which connecting individuals, communities, and environments is an important theme. This is visible in the many – often award-winning – projects that De Vries has realised over the past 27 years, in the Netherlands, France, Poland, and the United States, among others. From 2015 to 2019, De Vries was chairman of the Royal Institute of Dutch Architects (BNA). She currently combines her work for MVRDV with her professorship at TU Delft. As Professor of Architectural Design, specialising in public buildings, it is her mission to show how designers can contribute to solving social problems. De Vries is also a member of the Supervisory Board of the Groninger Museum. 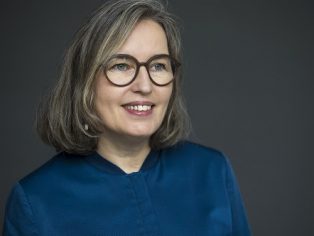