MVRDV and The Why Factory have created a number of key contributions to the “Eyes of the City” exhibition at the 8th edition of the Bi-City Biennale of Urbanism\Architecture (UABB), on show until March 2020 in Shenzhen. Inspired by the exhibition’s technological focus, MVRDV’s installations take an optimistic look at the human potential of recent urban technologies, while also confronting those technologies’ problematic aspects. These contributions include the exhibition’s check-in and check-out points, which incorporate facial recognition technology, and video installations showing research projects by both MVRDV and The Why Factory into the future of urban air mobility

Eyes of the City is curated by MIT professor Carlo Ratti acting as Chief Curator, and by Politecnico di Torino and SCUT acting as Academic Curators. It explores the impact of new technologies, such as artificial intelligence and facial recognition, on urban life. American historian of technology Melvin Kranzberg said that “technology is neither good nor bad; nor is it neutral.” Using critical design as a tool, Eyes of the City seeks to create experiences that will encourage people to form an opinion and become engaged citizens.

Eyes of the City Infopoints

Eyes of the City will be the first exhibition to integrate facial recognition on its own premises. Located within Shenzhen’s Futian high-speed railway station and covering a surface of more than 5,000 square metres, the exhibition reacts to its transportation-hub location with a unique design, inspired by duty-free shopping areas.

To enable the concept developed by the exhibition designers, MVRDV designed info points at the entrances and exits of the exhibition where users would check in and check out using facial recognition. This will allow the curatorial team to gather data on people’s experience at the exhibition: which exhibits they saw, how long they stayed, and so on. However, the technology implemented by these info points allows visitors to “opt out” of this system by using a special sticker placed on their face, forcing each person to confront the presence of the facial recognition system and carefully consider the actions they take in response to it.

“We try to be a think-tank and a mirror for this technology, to explore how facial recognition can be developed, and how to position it,” says MVRDV founding partner Winy Maas. “Our info points make the user aware of their experience. It’s almost impossible to go through as a group – the design acts as a ‘filter’ that you go through individually, and in which you can choose to participate or not. They therefore make the user very much aware. We make the system subtle but clear at the entrance and exit, and hence the issue can be felt and discussed.”

City and the Sky Above (in partnership with Airbus)

Since 2017, MVRDV has been a part of a study led by Airbus Urban Mobility to envisage the future of Urban Air Mobility (UAM) using self-piloted, zero-emission, electric air vehicles. The study focuses in particular on the implementation of this technology at an urban level and its impacts and potential benefits for cities.

In the City and the Sky Above exhibit, located just inside the entrance to the Eyes of the City exhibition, a circular platform invites visitors to relax on the transparent inflatable chairs and cushions, turning their eyes skyward to a dome suspended above their heads. On this dome, a video projection guides visitors through the history of urban mobility and the challenges inherent in introducing new technologies, and a vision developed by MVRDV in partnership with Airbus Urban Air Mobility of a better urban future that incorporates air mobility.

The original study into UAM was conducted by MVRDV and Airbus Urban Mobility with Bauhaus Luftfahrt, ETH Zurich, and Systra. The installation at Eyes of the City was designed by MVRDV and funded by Airbus, while the video was produced by Squint/Opera.

Also at the Eyes of the City show, two complementary video displays investigate the far future of airborne urbanism. The first video is SkyCity, created by The Why Factory, the research group and think tank led by Winy Maas at TU Delft. This video presents a futuristic vision of floating cities, where buildings are formed from a constantly shifting swarm of elements that adapt, minute-by-minute, to each residents’ needs. By creating “artificial clouds” in this way, the capacity and flexibility of the planet is increased. The second video is Stream City, created by Stéphane Louis-Alexis-Borel at Design Academy Eindhoven, which imagines how human cultures might adapt to a world in which everyone has a personal jetpack.

In addition to participating in the Eyes of the City exhibition, MVRDV is also participating in an ancillary exhibition at the UABB, this time located in Qianhai, in the west of Shenzhen, showing MVRDV’s work in the city over the last 20 years. “This exhibition will show the trials, errors, and successes of MVRDV in this emerging megalopolis”, says Winy Maas. “It shows, for instance, what was invented in Shenzhen and ultimately built in Almere Oosterwold.” The exhibition will be on show at the Qianhai Kerry Centre from February 27th to May 4th.

At the same venue, from February 27th until March 4th, Winy Maas and The Why Factory will lead a week-long workshop with around 50 local students to envisage “Qianhai 2.0”, outlining a possible future for this booming new business centre in Shenzhen. “With this workshop”, adds Winy Maas, “The Why Factory will investigate how traditional Chinese urbanism can be made more humane and ecological”. Following the conclusion of the workshop, the results of the students’ work will also be shown at the Qianhai Kerry Centre, from March 6th until May 4th. 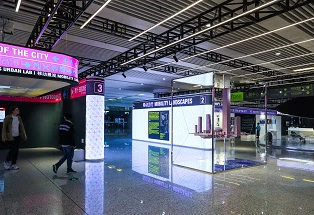 The Eyes of the City exhibition is on show at the the Bi-City Biennale of Urbanism\ Architecture (UABB) in Shenzhen from until March 2020 Image: © UABB

The info points designed by MVRDV at the entrances and exits of the exhibition allow users to check in and check out using facial recognition Image: © Prospekt

The City and the Sky Above installation shows the vision developed by MVRDV, in partnership with Airbus, for the future of Urban Air Mobility Image: © UABB