For Boyes Rees, architects working on the project to redevelop London’s historic Mount Pleasant Mail Centre, the differing styles in the external envelope were to present a challenge, particularly with regard to the windows and glazing. Steve Menary reports.

The Mount Pleasant Mail Centre is one of the world’s oldest and largest sorting offices. Often known simply as Mount Pleasant or just ‘The Mount’ and situated on the borders of two London Boroughs, Islington and Camden, the centre was developed on the site of the Coldbath Fields Prison, which closed in 1885.

The first mail centre at Mount Pleasant opened four years later. Over the years, further buildings were developed at the site, particularly in the 1920s and 1930s. The architectural styles differed but the building became a London landmark.

When Royal Mail set out to centralise their sorting offices across the EC, WC and W1 post-codes into one central London location, the Mount Pleasant Mail Centre was the obvious choice.

“Due to the historic context, the Post Office building was an art deco style, whereas the LOB was developed in the 1930s and had a different style. One of the driving forces for what we did was to reflect the original styles of the buildings in a modern way. The council wanted us to lift them and pick up the best historic context.”

One of the aims of the project was to allow for the closure of the Rathbone Place Delivery Office in the West End and rationalise the space at Mount Pleasant to allow for three delivery offices, instead of two. The project spans three phases. The first was the redevelopment of the ground floor of the mail centre; while the second was the integration of the delivery office Head Office functions, along with facade and roof repairs. The Mail Centre is now the only one serving Central London following the closures of those at Nine Elms and Bromley-by-Bow. This centralisation of services was an extremely important part of Royal Mail’s strategy for serving Central London.

A feasibility study for phase two was carried out by Faithful & Guild and then verified and reviewed by Roscoe Group, which describes its work on the project as: “A particular emphasis on interrogating the existing cost plan. Our approach was to develop a ‘real time’ cost plan through the utilisation of an early supply chain team to enable work packages to be benchmarked.”

For a contractor, the Royal Mail appointed Mace subsidiary, Como, with work led by project director, Steve Argent. Around 500 workers were on site for most of the 18 month construction period with workers having to work around Royal Mail staff as the site had to stay open 24 hours a day.

“This project was particularly challenging because the existing Mail Centre and Delivery Offices had to remain in use throughout,” adds Mr McLennan.

The building is concrete-framed with solid concrete walls. Externally, a grimy exterior was renovated as original concrete walls were stripped back and monolithic render renewed. This was overpainted with a Fosroc Dekguard system in a natural white colour. The original windows had long since been replaced by UPVC windows and for Como and Boyes Rees, the choice of window solution was to be central to ensuring the client’s design specification was met.

“Historically it would have been sliding sash windows on the LOB. The opening lights are no longer required for ventilation but are needed for smoke clear- ance in the building, so we went for a frameless glazing option for the opening lights. We couldn’t make the window spaces any bigger and we wanted to keep window appearance simple with a shadow gap around the outside. That led us down the route of curtain walling as the most appropriate system.”

The Technal curtain walling specified was polyester powder coated (bronze externally and white internally) and glazed in clear low E high performance solar control glass to further improve the building’s energy efficiency, and was used for all of the elevations on this section. The largest glazed unit that was installed spanned 1.7 metres.

“We looked at a number of systems and solutions and Technal gave us the best options in terms of frames. Our aim was to create panels of flush glazing with a smooth frame and slim sight lines. Having used Technal’s systems on other projects, we were confident that they could successfully realise our design for the glazing and cost effectively.”

There are three major floors at Mount Pleasant each measuring about 10,000 sq m, while there are also two mezza- nine levels in the corners and a basement. Internally, the aim of the project was not just to create more space but more light. The specification of curtain walling helped alleviate the gloom as the bronze colour of the external facade system was replaced by white finishing internally.

“Internally the original building was a mixture of cream, dark green and grey and very depressing,” adds Mr McLennan. “It is now white internally to maximise the light. You can do that more easily with curtain walling rather than window sections because of how they are put together.”

An original parquet floor was replaced with a screed and then a BASF system supplied by Polydeck Resins. Internally, Mount Pleasant is now a mixture of Royal Mail red, white and grey.

“What we did was to fully strip out and refurbish the interior, which enabled Royal Mail to bring

in a delivery office from Rathbone Place. Now, all central London deliveries are co-ordinated from here.”

This span of delivery locations is reflected by place names that cover the outside of the building ranging from London locations, such as Blackfriars and Hatton Garden at second floor level, to regional cities from Derby and Exeter to Leeds on the first floor level. “We were restricted to places with six- letter names on the lower level because of the building design,” smiles Mr McLennan.

The Public Office Building (POB) sits on the corner of Farringdon Road and Rosebery Avenue and required a different glazing solution. “On the POB, because it was art deco we had to get a horizontal emphasis with a mixture of opening lights,” explains Mr McLennan.

For the glazing on this element, Boyes Rees specified windows that were manufactured by Smarts of Bristol, and also installed by Glassolutions. Externally, though the style of the windows on the LOB and POB differ, the colour scheme remains the same – bronze.

The overall value of the rationalisation project is estimated at between £40 million and £50 million. The Mount Pleasant base, which also includes a childrens’ nursery and the British Postal Museum & Archive, sits on a 12 acre site and the third and final phase of the project will involve some of this site being sold off. That remains ongoing, but Rathbone Place closed in 2013 and the first two phases were complete and opened by the summer of 2014.

During the evening, the south elevation is lit with LED floodlights. To cap off the scheme, in a fitting testimony in the 100-year anniversary of the start of the First World War, a memorial from Rathbone Place was also moved to Mount Pleasant, which is now a lighter, brighter centre for the Royal Mail in central London. 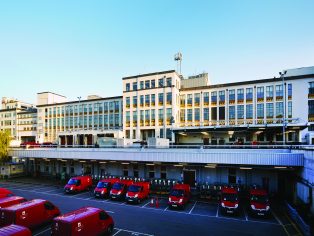 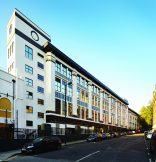