Flowcrete UK has worked with Glasgow’s historic Kelvin Hall during a £35 million refurbishment project to help turn the much-loved building into one of the city’s most exciting entertainment and leisure venues.

In 2014, Glasgow City Council, Glasgow Life, Glasgow Museums, the University of Glasgow and the National Library of Scotland formed a partnership to transform the historic site into an exciting new centre of cultural excellence that would showcase museum collections, engage in teaching and research as well as provide a health and fitness centre.

With such a demanding client brief and the physical constraints of a listed building, the project’s architects, Page\Park Architects, worked with the best stakeholder groups and partners to deliver a design solution that would maximise the building’s potential.

In a nod to the old exterior, the new design took advantage of the exposed original stonework and combined it with solid oak, seamless resin terrazzo, decorative tiles and pendant lamps to create a sleek and contemporary zone for visitors to enjoy.

In order to provide a high strength screed that could cope with the stresses of heavy foot traffic, Flowcrete UK supplied 1,750 m2 of heavy duty Isocrete K-Screed to ensure a robust floor buildup in the main reception that would be able to withstand Kelvin Hall’s 25,000 weekly visitors. Proprietary additives were incorporated within the screed material, producing an earlier drying time and ensuring that the flooring installation was completed in a faster timescale than a traditional screed system would allow.

To achieve a visually appealing floor finish, 1,600 m2 of the seamless resin terrazzo system Mondéco Mirrazzo was applied over three floors in the main reception, café, corridors, stairwell and transitional areas in a light silvery grey colour that matched the structure’s interior design scheme. In selected areas, an asymmetrical two-tone effect was achieved by applying a darker shade of grey along one side of the corridor that blended seamlessly up the wall.

The resin element for the ground floor main corridor included 65m of Mondéco coving running up the wall to a height of 400mm. Mondéco Mirrazzo was also applied to the feature wall in the reception area to a height of 2.2m.

Light-reflective aggregates are incorporated within Mondéco Mirrazzo to convey a glittering, luxurious lustre across the floor’s surface. The hard wearing nature of Flowcrete UK’s Mondéco range meant that Kelvin Hall’s new floor would retain its aesthetic properties for the long term despite the heavy foot traffic, frequent cleaning, impacts, scuffs, scrapes and stains that it would inevitably be subjected to.

The refurbishment project successfully brought approximately 50 percent of the building back into use and secured it as one of the nation’s most influential buildings for generations to come.

Thanks to the considered approach and high quality materials used, the historic exhibition hall has been transformed into a 21st century hub of cultural, academic and sporting excellence; providing a new home for its 1.5 million treasures, research and education as well as providing a state-of-the-art health and fitness centre.

Since reopening, Kelvin Hall has gone on to win both the Project of the Year title as well as the Tourism and Leisure category at the 2017 RICS Awards, Scotland. Kelvin Hall also won The Judges Award of Merit at the Scottish Property Awards as well as the Best Regeneration Project category at The Herald Property Awards and was shortlisted in this year’s Architect Journal Retrofit Awards. 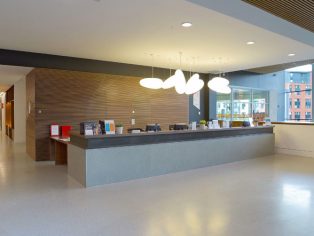