Miller Construction has been selected to deliver a new £30 million ‘learning campus’ in Holywell, North Wales. The project – to build a new primary and secondary school on the land adjacent to an existing High School – is the first to be announced as part of a four-year £270 million North Wales Schools and Public Buildings Contractor Framework to which Miller was appointed earlier this year.

Both are due to open from September 2016, offering the most up-to-date educational and IT facilities in modern, efficiently designed buildings which will also be available for wider community use. The campus will be delivered as part of the 21st Century School building programme.

“This is another milestone in the provision of this exciting new learning campus in Holywell. It will be a wonderful modern new facility for children, young people and the wider community. The contract is also the first to be let under the new North Wales Schools and Public Buildings Contractor Framework.”

“We are delighted to have been selected to deliver the new learning campus. Miller has a long track record of delivering high quality and best value schools with lasting community benefits. We now look forward to working with all the participating stakeholders on the project and to building lasting relationships with these schools and the communities they will serve.”

Miller was appointed to each of the Framework lots including: projects from £4.35 – £7.5 million, £7.5 – £15 million and is one of only three contractors appointed to deliver high value projects exceeding £15 million.

The Framework provides councils with a pre-qualified group of contractors which streamlines the tendering processes and makes the process of selection more efficient. Miller has also committed to help deliver a core set of community benefit in partnership with the councils involved. 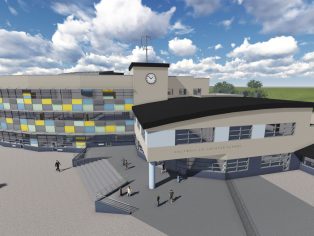