Merseylink has on 20th June been announced as the preferred bidder for the Mersey Gateway Project by Halton Borough Council.

Making the announcement together in the observatory in the Catalyst Museum in Widnes overlooking the River Mersey, the council and Merseylink also confirmed they have jointly identified savings amounting to ‘tens of millions of pounds’ on the projected public sector contribution to the £2billion project budget.

Merseylink and the council team will work on the final details of the plans before reaching financial close, signing a contract and starting site clearance and demolition later this year. Full details of the winning bid will be published at that time.

The Merseylink plans retain the iconic three-tower design associated with the Mersey Gateway Project but have developed the construction methods.

The Merseylink design for the main bridge is based on a reinforced concrete deck, which is a change from the reference design, based on steel fabrication. This is one of the areas that has produced significant financial savings for the project.

Once a formal financial close is reached, Merseylink will then become the project company and will work with the council to deliver a 30-year contract to design, build, finance and operate a new toll bridge over the River Mersey between Runcorn and Widnes, together with associated work in the towns.

The centrepiece of the Mersey Gateway Project is a new six-lane toll bridge over the River Mersey. The existing Silver Jubilee Bridge will also be tolled as part of the project, which will bring major estimated economic, transport and social benefits to the region, including:

Mersey Gateway is being part funded by the Department for Transport. Ministers will consider the Council’s final funding submission later this year. Any financial savings confirmed at that time on the projected budget will be split 70/30 between the UK Government and Halton Borough Council in line with an existing agreement over the 30-year lifetime of the project.

Halton Borough Council will be ploughing its portion of the savings back into the project to improve financial resilience and to reduce the impact of tolls on local residents, including supporting public transport options.

Its members have delivered many high profile projects around the world in recent years, including the Golden Ears Bridge in Vancouver, the Vidin-Calafat Bridge in Bulgaria, the Incheon Bridge in Korea and the M50 widening in Dublin.

“This is a hugely important day for Halton and the north west of England. This partnership with Merseylink will deliver Mersey Gateway for the next 30 years and it is very exciting to be part of something that will bring thousands of jobs and major regeneration opportunities to the region for years to come.

“We all know something needs to be done to relieve the pressure on commuters who are used to being stuck in queues to cross the Silver Jubilee Bridge and we know from talking to local businesses, both big and small, that this is a major issue when it comes to growing the north west economy.”

“I am thrilled that we have found a solution that keeps the iconic design, but also produces significant financial savings for the council and the Government. Our savings will be ploughed back into the project to reduce the impact of tolls on local residents and support public transport options.”

“This is great news for the team and we are looking forward to working in a long term partnership with Halton Borough Council to deliver this much-needed new bridge, which will see benefits to the local area in terms of jobs, transport and regeneration potential. Our consortium has a wealth of experience of major projects across the globe and we are confident that we have the capability to deliver the Mersey Gateway Bridge to schedule and budget, with the least possible disruption to the local community.

“We know how important this project is to the region and will be working closely with the council, the local LEPs and bodies like the Halton Chamber of Commerce to do everything we can to maximise the benefits it can bring. I would urge businesses to register as potential suppliers at www.merseygateway.co.ukso they can keep in touch with future opportunities.

“We will soon roll out a programme of activities designed to communicate with local residents and stakeholders to ensure that the public is kept informed of our plans and project progress. We will kick this programme off at our Meet Merseylink open days, which will be held on the 9th July in Runcorn Town Hall and the 16th of July in Stobart Stadium, Widnes.”

“The outcome of procurement demonstrates the value in allowing private sector to modify the design in order to reduce costs. The quality of all the bids we received and the work put in by all the shortlisted bidders has been of a very high standard, and each one satisfied our challenging requirements. We now have a very attractive final offer from Merseylink, which means that we don’t need all the money we originally requested from Government.” 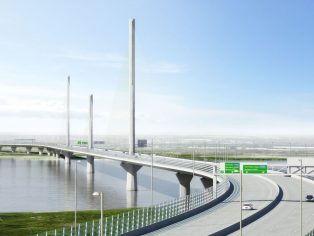