Plans to build Britain’s first ‘floating village’ at London’s Royal Docks moved a step closer today after the Mayor of London, Boris Johnson, revealed that Carillion Igloo Genesis had won the competition to design and build it.

The Mayor unveiled ambitious plans in February 2013 to create a ‘floating village’ as part of his on-going drive to transform London’s Royal Docks bringing jobs, commercial space and homes back to the capital’s waterways.

Following a competition, Carillion Igloo Genesis has been selected to transform the 15 acres of water at the Royal Victoria Dock site, sitting directly to the east of the Emirates Airline, transforming it into a thriving community with floating homes, restaurants, cafes and bars.

Although a first for the UK, floating developments are already a popular idea on the continent with successful schemes at ljburg near Amsterdam and Hafen City in Hamburg as well as many others examples of floating homes throughout Scandinavia. The architects for the floating village are dRMM, led by Professor Alex de Rijke. Professor de Rijke recently presented his studies on floating villages to the prestigious Venice architecture biennale. The scheme engineers are Buro Happold.

The winning consortium’s scheme includes a custom build approach for each of the 50 residential homes, enabling prospective occupiers to be part fo the design-process of their homes, and a blue water square, framed by a market square and a floating corniche. There will also be a large multi-purpose events space and a mix of non-residential uses including restaurants, cafes, shops and leisure and office space. Plans for additional facilities, such as a floating Lido and an ice rink, were also proposed as part of the bid.

The scheme takes inspiration from the tried and tested floating homes at Ijberg and have been assisted by Dutch floating structures experts Mark van Ommen of Floatbase and Ton van Namen of Monteflore who have already delivered exemplar schemes of over 300 floating structures.

The Mayor inherited almost 700 hectares of land as a result of the Localism Act and is currently one of the largest owners of public land in London. He is determined to bring more public land forward for development and accelerate the number of homes being built for Londoners. Working with the London Borough of Newham, this includes the regeneration of the former Royal Docks area, with recent investments in this area including the opening of the Emirates cable car and the Siemens Crystal Centre, as well as forthcoming developments on GLA owned land at Silvertown Quays and Royal Albert Docks which combined would result in over 8 million sq ft Gross External Area of new commercial space.

“This site has the potential to become one of the most sought after addresses in the capital while breathing new life back into London’s waterways. Carillion Igloo Genesis’ scheme will create a unique mixed use development providing a range of commercial activities within a high quality water environment for Londoners and visitors, creating jobs and raising the profile of London’s Royal Docks.”

“Living in a floating home you’ve helped to design is a dream lots of us have. By combining the floating home experience of our Dutch collaborators with our custom built business we hope to make these dreams come true in Royal Victoria Dock for a few lucky Londoners. East London’s place on the tourist trail is growing fast. It’s about to be joined by Europe’s largest floating village, with floating markets, creative workspace, events and watersports.”

“We’re delighted to be partnering with Carillion-Igloo in this exciting and innovative regeneration project. Through Genesis’ involvement in the bid, we’ve been able to secure a higher allocation of affordable housing within this scheme, which chimes closely with our mission to deliver diverse, mixed tenure developments in London and the South East. Drawing on our expertise in running other high profile London regeneration projects we aim to create a sustainable and thriving community.”

“We are delighted that Carillion Igloo Genesis has been selected as the development partner for the floating village. We created the concept for London’s floating village some time ago, having seen similar developments elsewhere in the world – particularly in Holland. It’s great that Carillion Igloo Genesis have joined forces with some of the people behind the Ijburg development in Amsterdam to create some really imaginative, innovate designs that will help establish London’s Royal Docks as a unique and exciting place in London.”

Carillion Igloo Genesis’ submission is 100% floating with the walkways, residential and non-residential units anchored in place using a series of piles located within the dock and connected to the dock by bridges.

The floating water-homes will use the same concrete foundations that are already in use at the Ijburg development in Holland. The construction of the homes including the bases will be carried out off-site and then transported by water to site.

A planning application is expected to be submitted to Newham Council in Spring 2015. 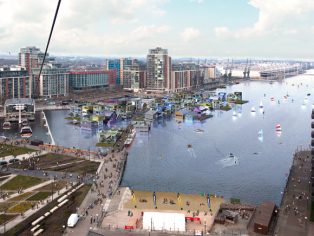