The Norwegian Olympic Museum was officially opened by Queen Sonja at a VIP event on 12 February to coincide with the 22nd anniversary of the 1994 Winter Olympics in Lillehammer.

Design consultancy Mather & Co. led on the design of the museum, which takes visitors on a journey from the origins of the Olympic Games in Ancient Greece through to the greatest Norwegian Olympic moments of all time.

“We were extremely delighted to be involved in such a fantastic project and design installations that will hopefully excite visitors for generations to come.

“The key focus for us was to tell an authentic story that brings to life the rich history and culture of Norway and the Olympic Games – a feat I feel we’ve successfully achieved.”

Dominating the main exhibition space is a ski jump emerging from underneath the northern lights. This was inspired by the Lysgårdsbakken ski jump arena.

“Mather & Co. are at the cutting edge of their industry, constantly creating exciting and innovative installations that truly capture the minds and hearts of visitors. We were delighted to have them involved in the project and here to celebrate its success at the official launch.”

From legendary explorer Fridtjof Nansen’s original skis to legendary Thorleif Haug’s first Winter Olympic God in 1924 to the amazing Marit Bjørgen’s Olympic success in the last games, visitors will be able to explore how Norway has inspired and developed winter sport worldwide and now leads the medal table as the most decorated country at the Winter Games ever.

Other exhibits include “Inside the race”, a video installation that takes visitors into the mind of athletes during competition, immersing them in the narrative of what it is to be a true Olympian, and an ‘Opening Ceremonies’ audio-visual exhibit which were developed by Centre Screen.

The museum will be suitable for those who are interested in sports, history, culture and society, both young and old. 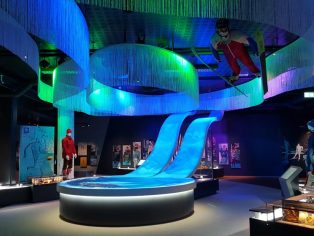