Making a grand entrance at Paddington

However, Crossrail’s Paddington station is no mere extension of Isambard Kingdom Brunel’s iconic glass and wrought iron cathedral. An architectural entity in its own right, it also forms a dramatic new entrance to the old station and creates an exciting public realm, too.

The underground metro station cleverly integrates the old and the new to create a grand entrance and stronger presence on the western side of the Grade 1-listed, 1853-built original, reaching out into the locality in a way it hasn’t before.

It is being built adjacent to the western boundary of the main station formed by a 300 m-long collection of Victorian terraced masonry buildings known as MacMillan House.

Running parallel to MacMillan House are two streets on different levels. The lower, known as the Departures Road, provided access to the old, rather nondescript western entrance. Three metres higher and separated from it by a restored Brunel iron railing is bustling Eastbourne Terrace, with its buses, taxis and shops.

A 260 m-long, 26 m-deep box was dug out under the middle section of these two roads to house the station, which has seven levels.

At the bottom is the link to the Bakerloo tube line on level 7, the Elizabeth line platforms are on level 5 with the station concourse at level 4. Lifts and escalators link the concourse to the pedestrianised public space on level 2. The highest level is Eastbourne Terrace while services and ‘back of house’ facilities are on levels 6 and 3 respectively with no public access.

A 90 m-long void has effectively been created by the circulation areas between levels and uniquely for a UK underground station, from Eastbourne Terrace the public can peer 14 m down into the concourse.

Access to the main station from both the concourse and public realm is through MacMillan House via the old Clock Arch and a new Crossrail Arch, with a taxi-rank located on the eastern side of the terminus.

Poised majestically above all of this is the 130 m long, 25 m wide steel and glass canopy that runs over the station.

The practice was responsible for designing the terminus’ modern ‘canal side’ entrance on the east side, opening in 2012.

“When we first got involved with the new station in October 2009 there was already an older design on the table but we thought we could look at it in a different way,” explains founding partner Rob Naybour.

“There’s no doubt the Brunel station is fantastic, but the original entrance on the western side was always weak, the station had no presence in the locality and was difficult to find.”

Weston Williamson’s idea was to make the Crossrail station very much part of the existing Grade 1 station while creating something distinctive, forming a grand entrance to both the new Elizabeth Line and the main station.

“I think we’re giving this side of Paddington the entrance it deserves but has never had and creating a ‘great space’ that responds to Brunel’s own great interior,” says Naybour.

The new station is actually built on the same 10 ft grid the celebrated Victorian engineer used to construct the original. Make no mistake though, in the spirit of Brunel, this is an unashamedly modern building, very light and airy, with large openings to the fresh air.

“The architecture of the station is actually very simple, straightforward and elegant but has a sense of presence and drama because of its scale and the spatial interconnection with the various levels.”

“The public space provides passenger circulation, links to buses and a sheltered space for people and makes the attractive buildings of MacMillan House accessible and part of the station instead of a piece of disconnected streetscape.”

The structure of the glass canopy, roughly covering the same area as half a football field, comprises a mixture of painted steel beams and mirrored stainless steel purlins supported by

a series of painted steel columns along its length. Although larger spans could have been used as an alternative,

the columns help define the space and keep everything to the right scale.

The canopy extends out from halfway up MacMillan House across public space and station concourse and projects over the pavement on Eastbourne Terrace, clearly defining the station from the outside. Undoubtedly one of the most striking

elements of the canopy is the gigantic cloudscape painted on it by New York artist Spencer Finch.

Naybour comments on the effectiveness of the artwork in the setting:

“People will see the interplay between the cloud art and the outside weather, creating many different effects, and at night there will be another range of effects.

“Additionally, the shadows created by the cloud art make interesting patterns on the floor beneath and the highly reflective purlins work really well with the art, too.”

The canopy has also been specifically designed and engineered to achieve maximum blast resistance, which was a  test for the design team. Naybour explains:

“This is technologically challenging, so we worked with the engineers to meet stringent safety standards.”

They liaised closely with specialist Austrian glass manufacturer Wagner Biro, one of only a handful of companies in the world capable of providing the glass products needed. To ensure it worked, a small mock up of the engineered canopy design was built and fully blast-tested in Cumbria.

Despite the large amounts of glass involved, solar gain is not a problem as air freely circulates under the canopy thanks to the 8 m-high gap along the whole length of the street-facing side and is open to the air at each end.

In terms of sustainability, the station’s energy usage is actually relatively low, being an unheated space with all-LED lighting and natural light, although the carbon footprint of its construction is hefty. Despite this, Paddington is set to meet Crossrail’s target of achieving a BREEAM Very Good rating for the construction of all of its central stations.

“Internally the finishes are based on a relatively restrained pallet of materials and colours,” says project architect Raffaella Rospo.

“We selected simple, natural materials with a natural patina, brick, bronze, concrete, and we’ve let the engineering speak, with lots of exposed brick and concrete on show.”

Flooring is in granite and terrazzo in light and dark colours, while solid granite blocks serve as seats and protect glass features from cleaning and maintenance vehicles.

The pillars on the platform and concourse are graced with real bronze cladding around the bottom of concrete support pillars and at the platform ends, reminiscent of bronze features in 1920s tube stations and the terminus.

Another notable decorative feature on the platforms and concourse are the elegant ‘lily pad’ lights, housed in circular, scooped recesses in concrete soffits.

Links between public levels are primarily via escalators. Five link the public space to the concourse and. from there, four equally spaced escalators connect to the platforms. A pair of mid-platform escalators link to the Bakerloo line platforms and a potential future link to the Circle Line is included.

“The whole essence of the station starts as you step off the train. Natural light comes from the escalators and as you move up you’re in the concourse and then the public space. It’s so obvious and intuitive where you have to go, you don’t really need signs.”

Alternatively there are lifts in an eye-catching glass and steel tower at the heart of the facility. Rospo says:

Tunnel vents in the urban realm On the street in front of the station are two 40 m-long buildings housing railway tunnel vents.

“Normally vents are hidden but as the new line is aligned with the street there was no nowhere to hide them. Although their positioning narrows the pedestrian thoroughfares, they’re relatively small compared to the canopy and don’t impact disproportionately on the streetscape.

“A key part of the design challenge was slotting them into the urban realm. After liaising with English Heritage we designed sculptural, relatively restrained architectural buildings.”

The design and palette echo the main station and features glass-reinforced concrete, stone, and grey and bronze-coloured anodised aluminium cladding.

“This project is a team effort. Although we’re steering the design it‘s important to work with the engineers and other disciplines to temper the vision by what’s feasible and can save money. For example, £40m has been saved by keeping the box construction and interface with the Grade 1 terminus to minimum.

“We look forward to seeing it put to good use.” 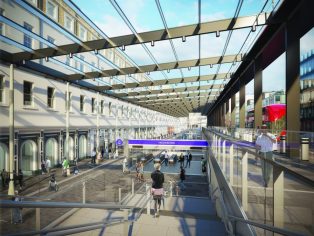 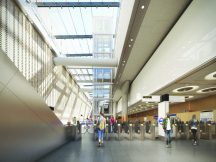 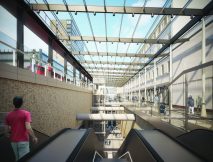 Looking down onto the concourse from the public space area © WestonWilliamson 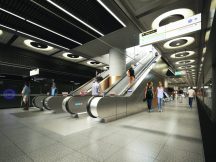 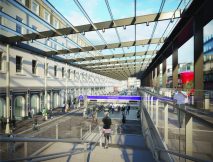 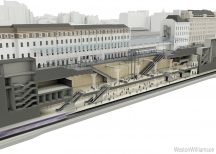 This illustration shows the relationship between Macmillan House, the platform, concourse and public space levels © WestonWilliamson