BDP’s new shopping complex in one of the UK’s most historic and rigorously-planned cities features copious glazing, as subtly as possible. Roseanne Field reports:

Oxford is renowned for its architectural as well as academic heritage. Home to one of the oldest and most esteemed universities in the world, the city’s distinctive classical architecture dates back centuries.

It was therefore always going to prove a challenge to redevelop a dated 1970s shopping centre to meet the expectations of the 21st century customer. Westgate, so named due to its entrance where the medieval West Gate into the city used to sit, eventually reopened in October last year after an incredibly protracted and complicated planning process.

It was vital that the building didn’t look out of place among the local architecture. Oxford’s planning structures are such that while initial plans for the redevelopment were released in 2004, several rounds of adaptations had to be made and final plans weren’t adopted until 2010, with full planning permission not granted until 2014.
“It’s in the centre of Oxford, so minimising the impact to the skyline was critical,” explains BDP’s Neil Hayward, who worked as part of the masterplanning team. In fact, a particular building within Oxford – the 12th century Carfax tower – sets the height limit for all developments within the city centre.

So stringent was the planning that BDP had to prepare a range of different drawings and images for weekly planning meetings that took place over two years. “We had to do lots of verifiable views which defined the extent of where we could build,” Hayward explains. This situation is unique to Oxford and as well as the planning meetings – which are still ongoing despite the development having opened some months ago – there were three CABE reviews.

Westgate is predominantly the brainchild

of BDP, who was the lead architect and responsible for the masterplan and common elements, but the scheme also saw the involvement of Panter Hudspith, Allies and Morrison, Glenn Howells, and Dixon Jones. The developer for the project was Westgate Oxford Alliance, a collaboration between The Crown Estate and Landsec.

The development is broken into four primary spaces – the flagship John Lewis building and three other ‘blocks’. These are tied together by glazed roofs that also create the public squares. This glazing is a compromise to satisfy both Westgate Oxford Alliance, who wanted weather protection, and the local authority who wanted open streets. It was important that the development didn’t feel like a shopping centre. “We were allowed to cover the streets, but not enclose them,” explains Steve Downey, architect at BDP who worked on the roofs’ designs.

In order to adhere to planning, the glass roofs have been designed to have as little impact as possible. “It was important that they didn’t become ‘features,’” says Hayward. “The first design approach with these roofs was to design something that wasn’t fancy, something that didn’t draw attention to itself,” Downey adds.

BDP designed three separate glass roofs to create the public spaces – Leiden Square, South Arcade and Middle Square. Each of these areas presented its own challenges, but arguably none more so than Leiden Square.

The curved roof that covers the square is a somewhat different design to BDP’s initial idea. Describing the approach, Hayward says: “There’s a hierarchy of elements and that really started with the building blocks themselves, and then the streets and spaces in between, then these covering elements just needed to be calm and quiet, aesthetically speaking.” This therefore led to the idea that they would use the biggest pieces of glass possible in order to reduce the number of supporting elements.

BDP focus a lot of their work on glass and are always keen to push the boundaries and explore new technologies. Leiden Square, which is 25 metres wide, was

designed so that the buildings either side follow an eight metre grid. This naturally led BDP to look at a covering that conformed to the same gridlines. “We started off trying to keep it as simple as possible so it was a flat, rectilinear roof with 8 m x 1.5 m wide panels,” says Downey. They looked at using cold bent glass in order to allow the rainwater to run off either side and not just sit on the flat roof. However, as Downey explains, “there was only one specialist contractor that could do it so we were encouraged to design something that was more standard and practical.” The design therefore evolved so that the roof was vaulted slightly to create the curve.

Of course arching the roof increased its height and put it right at the maximum stipulated by ancient planning rules. This therefore left the roof with a relatively “flat” arch, which meant it “needed a tie in the form of a steel rod,” Downey says. “It’s so flat it almost wants to turn inside out so you’ve got to have that extra element.”

The practicality issues surrounding such large pieces of glass also became a challenge. “In the end things like cost, how easy it would be to replace panels, and safety came into it,” Downey explains.

They therefore divided each eight metre panel into three. “Within that there’s a hierarchy of structure as well – there’s the main primary beam and then the purlins which are a much smaller element,” says Downey. These box beams ended up deeper than a standard beam so were specially fabricated out of steel, as opposed to buying a standard rectangular beam and bending it. “They actually look better because a standard beam has got rounded edges whereas this is really crisp with sharp edges,” Downey explains.

The covering is raised above the top of the buildings either side by 1.5 metres. The glass is single glazed, but is strong enough for it to be walked on for cleaning and maintenance purposes.

As a general rule BDP incorporate as many safety features in their designs as possible. On Leiden Square this included handrails and walkways discreetly integrated into the gutters – everything was designed to have as little visual impact as possible. The roof spans across and attaches two buildings, it’s actually only fixed on one side. “In terms of engineering, the buildings are moving differently so it’s fixed on one side and slides on the other,” Hayward explains. “To create something as simple as this roof is very intensive.

We used parametric modelling – in terms of geometry and making it work there’s quite a lot involved.”

The 110 metre long South Arcade presented BDP with a different set of challenges. With Leiden Square and Middle Square, ventilation – in order to allow any smoke to billow out in the event of a fire – was more or less taken care of by the spaces’ open form. South Arcade however, which connects the two, presented a much “tighter space” explains Downey.

“We couldn’t float the roof like we did on Leiden Square because it started to get too high for the height restriction,” he says. The roof was therefore broken up into three sections running down the space – a main section that runs down the middle with two raised elements either side, allowing them to halve the required gap for ventilation.

The design for the main glazed roof section that runs down the centre of the arcade progressed from utilising cold bent glass to a more cost-effective sawtooth design, which minimised its height and allowed for the run off of rainwater. Each piece of single-glazed glass – laminated with a PVB interlayer – is at a three-degree fall and rises up 150 mm, supported by struts placed underneath and fixing to a main beam at either end. BDP built the gutters into these beams, which “minimised the detail by using elements for multiple things,” says Hayward.

The two raised elements on either side were initially going to be glass as well. However Allies & Morrison’s design for the louvre elements that run up above the shop fronts progressed, so instead of stopping at the roof they continue and extend partially across it. “These were value engineered and because you can’t really see them the decision was made that they could be ETFE,” Downey explains. Rather than the usual ‘pillows’, this is a single layer kept tight by cables running through it.

The smallest of the three spaces, BDP’s work on Middle Square consisted of covering the square itself plus two lanes either side. “It started off as a continuous glazed element, but that was further broken down as a design development,” explains Hayward. “We worked with Dixon Jones to redefine it and it became a very simple, strong parallelogram.”

The parallelogram aspect is fixed to the two buildings either side and pitches up slightly at two points. The two roofs over the lanes sit at a lower level and “there are overlaps of 45 degrees to prevent rain ingress.” The glass is supported by “strong, deep steel beams which define the parallelogram, then secondary steel beams to split up the glass,” Hayward explains.

An extensive project involving so many contractors and architects naturally required a substantial amount of collaboration. “When you’re integrating
the common elements into the individual buildings it’s critical that there’s a level of understanding of what each other is doing,” says Hayward. Supporting this aim, BIM proved key to the success of Westgate, allowing updated drawings to constantly be shared.

All the buildings used precast facades which meant cranes were required for almost everything – at one point there were a total of eight onsite. Coordinating all the various elements is “quite a logistical exercise,” says Downey. “Part of my role was working with the architects for each of the blocks, making sure they’re working within the constraints and getting information together at the right time.”

BDP defined the base materials and tones that could be used on the buildings, ensuring they were in keeping with the existing city. In particular, the entrance wall at Bonn Square, created by Dixon Jones, uses a local stone, while the brick facade of the John Lewis building was inspired by the Bodleian Library.

BDP’s lighting designers also worked on the project, who, says Hayward, “successfully fulfilled the brief by integrating subtle lighting throughout the scheme.” There was also collaboration with Hoare Lea, who helped develop the cleaning and maintenance strategies, and also on a study which ensured the various glass roofs weren’t going to cause unwanted glare at verifiable view points outside the city, as well as an environmental study for weather ingress and smoke ventilation.

Seele manufactured and installed all the glass elements. “They fixed netting below all the roofs which is quite unusual,” explains Hayward. “It allowed everyone else to continue with the work below.” They used a nearby plant area to store everything so it was easily accessible. Downey adds: “When they put the glass panels in, they apply mastic to the joints between the glass; they were amazing craftsmen.”

Various other factors also threw challenges at BDP – an existing road had to be rerouted around the development and the project included nine months of archaeology recording during the site works. Findings included Greyfriars bodies and tiling from a 700-year-old monastery.

Despite the project’s complexities, overall the development was “smooth and efficient,” says Hayward, and since the opening it’s received “very good footfall”. “Oxford is one of the most sensitive cities in the world,” he adds. “Working on a project like this was a truly unique experience.” 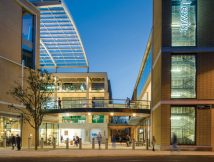 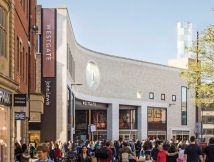 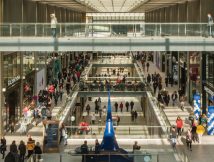 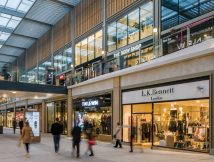 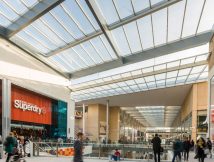 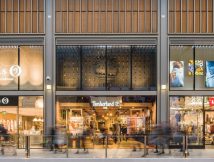